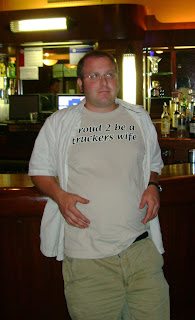 When I arrived in Chicago two years ago, one of the things I knew I had to try was an open mic. After much searching on the net I went to the The Edge Comedy Club at the Chicago Center for Performing Arts. I was terrified, my material was untested and to be honest mediocre. But surprisingly the experience was quite positive, the crowd was supportive and I actually got some laughs.

I have no desire to be a comic but I wanted to have the experience and The Edge was a great way to get my feet wet. The host was a funny guy named Dave Odd who would give notes to anyone who asked him. I went back a few times and saw regulars like Junior Stopka, Drew Michael and Hannibal Burress, all local comics who have since moved on to other "more seasoned" rooms, but at the time I had no idea who they were, just that they all were showing up at this particular open mic. Later after working at the Lakeshore Theater did I realize what a small world the Chicago comedy scene can be.

The Lakeshore is closed but Dave Odd's "Edge Comedy Club" is still going strong. I sat down with Dave and and got some insight into his perspective on the Chicago comedy scene. We covered everything from his motivation to the politics of comedy. One thing that really comes across when speaking with Dave is how passionate he is. The man has been producing comedy since 2001. He's done multiple shows in the city and suburbs, at one point he had showcases at seven different venues running simultaneously. In 2003 Dave produced a $1000 comedy contest at the Lakeshore Theater which was one of the first shows to bring stand up comedy to that influential venue.
In 2007 the Edge had it's six year anniversary at the Chicago Center for Performing Arts, which is where he also currently teaches a comedy class. Dave states that "The class focuses mainly on the business of comedy and becoming more professional and polished, not only material wise, but conduct wise". On top of all this he produces shows three nights a week at the same venue (a open mic and two showcases). In short he's a busy guy. According to Dave he gets criticized for taking aspiring comics money, but he passionately argues his point that he teaches and produces because he cares about the craft. "I don't do it for the money, I drive a 97 Taurus, I'm not getting rich off this"

Dave says there are two main goals that motivate him, "I do this for two reasons, to help comics become more professional and to challenge them to get better". When asked about his long running open mic Dave said "it's important to have an open mic for beginners, this is a great room for the comedian who is just starting out. It's the only open mic with a lobby and separate stage for the show. You don't have to talk over the bar noise or other comics". One of the points that Dave makes is how important it is to relate to your audience no matter where you are. "If all you do is Chicago rooms and your material never changes what happens when you go to the suburbs or Iowa and your set bombs? You should be able to relate and react to your audience no matter where you are".

We also touched on the six minute theory which is the idea of always doing the same six minutes no matter where you go or who you have in front of you. "I've got over three hours of material" says Dave, "I get bored doing the same material over and over, it's important to be able to gauge your audience and find what works". While interviewing Dave a telling scene transpired, while he was in mid-sentence and I was furiously scribbling my notes a man came up to us out of nowhere, introduced himself, asked if he could get on that nights set, and then proceeded to tell us several bad unsolicited jokes. Dave sat there patiently, didn't interrupt, waited for him to finish, gave him some notes and then told him who he should speak to to get on stage that night. And that sort of sums up, at least for me, what The Edge is all about. A safe, supportive place for beginners (or veterans for that matter) to work on their material and get feedback. Keep on keeping on I say. If your interested in taking one of Dave's classes check out Dave's website....