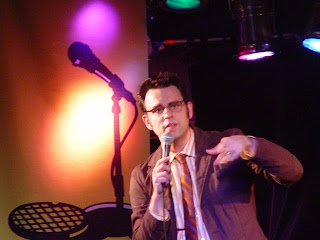 Went to the Beat Kitchen last night to check out Chicago Underground Comedy. It was my first time at the Beat Kitchen, which is a great bar, with good drink specials, nice booth seating and the a back room for comedy that is huge! It was also Dan Telfers Birthday!

Dan was one of the first local comics I ever saw perform at the now defunct Lakeshore theater in Chicago two years ago. When he performed a bit that referenced Voltron, venereal disease, frat bully's, the CTA and the wisdom of winos I knew he was special kind of nerd comic. Last night was no exception.

If you havevent been to the Beat Kitchen on a Tuesday night you are missing one of the best comedy showcases in the city of Chicago. Dan puts together one hell of a show, Adam Burke, Chad Briggs and Mike Stanley were especially polished and Dan himself was on fire, his dinosaur/audience participation bit is one of my favorites. Do your self a favor and check this show out. The showcase is every Tuesday $5 @ Beat Kitchen, well worth it.