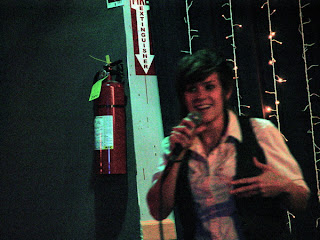 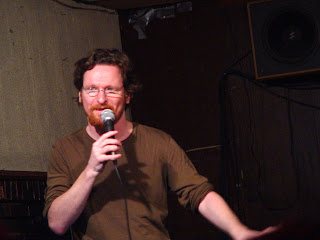 So we here at Comedy of Chicago have heard through the grapevine that one of the best open mic rooms in the city is Cole's bar which is every Wednesday and hosted by Adam Burke and Cameron Esposito. From what I have been told it's know as a supportive, well run, "veterans" room.

I finally made it to Cole's on Wednesday after hearing about it for so long. Now on first glance Cole's looks like the kind of dumpy dive spot that has been open forever but in reality it hasn't been open all that long, which is surprising considering it's "lived in" vibe and graffiti covered bathrooms.

But I kind of liked the bare bones ambiance, and I really liked the cheap ass drinks. $5 Octoberfest in a huge 16 oz glass! Ordered those shits all night long.

Adam and Cameron are a great team, they kept the show running smoothly, pumped up the crowd and were as polished and professional as you could ask for. And the comedy? Forget about it, funniest open mic I've been to yet, hands down. It's much more like a showcase then an open mic. BETTER than Schubas, yeah I said it.

I was really impressed with the level of comics that came up for the 3 minute sets, not to mention plenty of veteran comics like Junior Stopka, James Fritz and Bill Cruz to name a few. Look, I'm not trying to blow smoke up any body's ass, I know there are a lot of good rooms in Chicago and I try to be objective, but if some shit is great, it's great, and Cole's open mic was the best open mic performance I have attended to date and in my opinion is a great cornerstone of the Chicago comedy scene.

Now if they could just clean up the freaking graffiti. If you are a Chicago comedy fan you need to check it out, if your a new comedian get there early to get on the list. Every Wednesday 9:30 PM @ Cole's Bar 2338 N. Milwaukee Chicago Il.