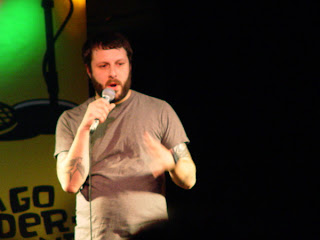 Went to check out the Hi Tops comedy showcase on Thursday night.  I've been hearing some good things about this place and when I found out Mike Lebovitz, Marty Derosa, and Clark Jones were doing a set there, I decided to check it out.  So the spot is right near the red line Fullerton stop on Lincoln and I'm told it's a Michigan State sports bar, which concerned me slightly, college bars can be annoying and who the fuck wants to watch comedy in a frat bar surrounded by people you'd like to mug.  But in reality, I actually liked the place.  The bartender lady was cool, they had $3 beers and the comedy took place in a big well lit back room separate from main bar, the way it should be done.

It was a nice tight show overall.  The hosts were just OK but they tried hard and kept the show moving. Clark Jones got things started with a solid set and then Mike Lebovitz did his thing.  I really like Mike, he's just a real mellow guy that is always gracious and relaxed off the stage. Mike's timing is great, his material is edgy and his jokes always crack me up even if I've heard them before.  But the real stand out of the night has got to be Marty DeRosa.  Fucking A. Marty your crowd work is off the chain.  Marty started riffing with the crowd in the front and basically got a chick to admit that she pees on dudes for money.  It doesn't matter if the shit is true or not because it was fucking hilarious.  Marty did around a 20 minute set and half of it was brilliant crowd work.  I gotta say, it was some of the better comic ad-libbing I've seen.  Marty's shenanigans are up there with heavy weights like Jim Jeffries, straight up no bullshit.  Funniest shit I saw all week next to James Frtz' live CD set.  Local comics take note, bone up on your crowd work.