Support Local Comedy Showcases Or Else! 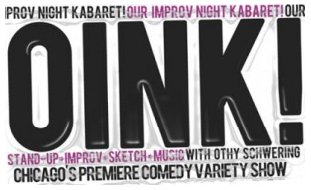 I want to plug two local showcases I attended last week, not because they were super amazing, but mostly cause the producers work their assess off and as a supporter of Chicago comedy I think it's important to check out as many local showcases as possible. They are Oink and Rotten Comedy. Yeah I know both of them have horrible fucking names. I don't think I could have racked my brain for worse names if I had a gun to my head but whatever. The venues for both rooms are great and both shows had some strong comic performances that were unfortunately diluted by weaker ones.  The point is that with great rooms like Schubas Open mic closing down, you never know how long showcases will last so you should check them out while you can. All I can say to the producers is keep your set list strong and I will keep trying to support and plug your shows. However just a quick note, if a super wack comedian with terrible DVD's in his hand to sell after the show tries to get on your set list or an improv group with one person who just cant act or sing wants to perform a musical number, say NO.