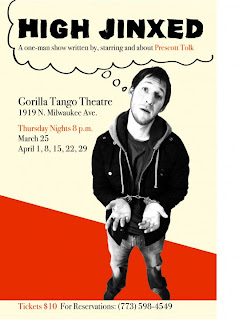 So I figured I should get ahead of the curve and plug some shows BEFORE they actually happen.  There's a lot of comedy going down this weekend but here are my top three picks.

The always funny Prescott Tolk has his last Chicago performance of "HIGH JINXED", his one man show before he takes it to New York.  I have been meaning to check it out but tonight was my last chance so I jumped on it, you should too.  Show is at 10 PM at the playground theater. 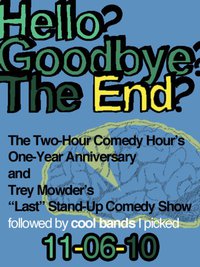 Tonight is also the second and last night of stand up comedy from Ken Barnard as part of his two night run at the Lincoln Lodge.  If you have never seen the twisted and hilarious Ken Barnard perform a feature length set, well tonight is your opportunity to do so.

Last but not least on Saturday, Trey Mowder says goodbye to Chicago and will host for the last time the  "Two Hour Comedy Hour" showcase which is having it's one year anniversary.  Trey is leaving town and will not be doing stand up for an indefinite period of time, so come on out sand show your support, here's the powerhouse line up.