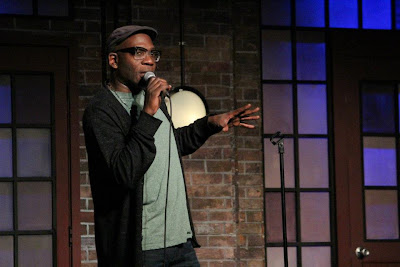 When I first got involved in the Chicago comedy scene, there was one guy I would see around at just about every showcase and open mic there was.  His name is Brian Babylon and this cat is one of the hardest working comics in the city of Chicago.  His style is cool and intelligent, his material inventive.  You can see this guy perform comedy just about everywhere.  He does stand up, he does radio, he produces showcases, not sure what this guy doesn't do.  I do know his birthday show is coming up Thursday night at Jokes and Notes with a power house line up.  Check out the interview.


COC: Why drives you to do stand up and how long have you been at it?


BB: My drive is to be a top player in the entertainment/media biz. And 4 1/2 years ago I started to use comedy as the outlet.

BB: Not that hot.. Way to wordy and over thought out.

COC: In your opinion, whats the best open mic in the city of Chicago and why?

BB: Jokes and Notes- Hands down!, it's a REAL comedy club with over 100 paying customers, it lets you know real quick who is really funny or just funny at some open mic bar.  Real funny people are not scared to go there, i.e. TJ Miller, Kumail, Junior Stopka and Prescott Tolk to name a few.

COC: Where do you get your sense of humor from?
BB:Every where really. I remember stupid things from when I was 3 or 4 years old.

COC: Who’s you favorite local comedian (besides yourself)

COC: Why does Chicago deserve to be know as a great comedy town.

BB: Because Chicago is the best of the U.S.A not too east or west just right...

COC: We heard you host a morning radio talk show, what’s that all about?

BB: I work for Chicago Public Radio's station vocalo.org I created, host and produce "the morning AMP" with my co host Molly Adams. It is on M-F 8-10 am 89.5fm or vocalo.org

COC:  Seems like you always got an event in the works, anything coming up?