Prescott Tolk was at the Rotten Comedy Showcase last week and he rocked it.  If you don't know about Prescott, the man is prolific.  His material is hilarious and original and his timing is almost perfect.  This guy performs stand up everywhere in Chicago and has a one man show that recently traveled to New York.  Do yourself a favor and check him out sometime. 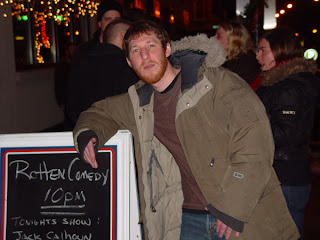 1. What drives you to be a comedian and how long have you been at it?
In 1999, I was one of a few dozen elite Jewish men selected by the Central Intelligence Agency to join the Laugh Getting Bro Team (L.G.B.T) with the express purpose to infiltrate American audiences and kill. 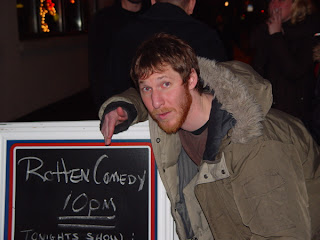 A lot of people don't know this, but I had a really bad stuttering problem growing up. A speech therapist recommended that I try stand-up comedy as a way to overcome my fear of talking to people. So the first time I went to an open mic, I was horribly nervous and kept stuttering the whole time. I managed to get through one sentence and still went 10 minutes over. At the same time, my it's-great-to-be-here bit destroyed the room.


3. In your opinion, what is the best open mic in Chicago? 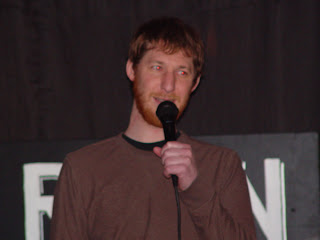 I don't like to divulge my secrets, but here goes. Instead of hitting up the traditional open mics, I find that it's more helpful to go to a place where there are no comics and you could get a good audience reaction. As a result, I take parking tickets off of other people's cars and contest them. This gives me a good 15 minutes of stage time a day in front of a part-time judge and four taxi drivers.

4. Where do you get your sense of humor from?
When I was seven years old, my family took me to a carnival in Palisades Park, New Jersey. I got lost in the crowd and struggled to find my parents. A dizzying blur of bearded ladies, strong men and fire eaters ignored me while I walked around in fear. Out of nowhere, a gypsy woman, bandanna and all, walked up to me, touched my face, and said, "Funny."

5. Who's your favorite local comedian besides yourself?
This is a tough question. There are so many people besides myself, and yet I'm having a hard time thinking of any specific names right now. There's that one guy who talks about how much he likes to drink. It's so funny. He gets crazy drunk and then describes what it's like. And there's that other guy who compares awkward sexual situations to mundane events. He also has the bit where he compares mundane events to awkward sexual situations.

6. Why is Chicago a great comedy town?
I think it was Henri Bergson who once said, "There's just something funny about a Great Lake."

7. Your one-man show High Jinxed is hilarious. Is it really all true?
Yes, I was arrested so many times that I was able to squeeze a great one-man show out of it. It's hard to follow that show with a new one that is as engaging. Currently a work in progress, my next one-man show describes how I routinely manipulate the number of coupons I use at Bed, Bath & Beyond.


8. Seems like you always got an event in the works. Anything coming up?
I'm working on a web series about an uncomfortably close head talking to a laptop video camera about pressing celebrity issues. No script. No editing. Totally organic, dude.

Shot out to the Hannibal Buress who showed up and did a surprise guest spot.  Hannibal killed it.  props to the Rotten Comedy Showcase as well, those boys have really steeped up their game, it has blossomed into a really solid showcase and has been booking some of the best comedians in the local scene
Newer Post Older Post Home