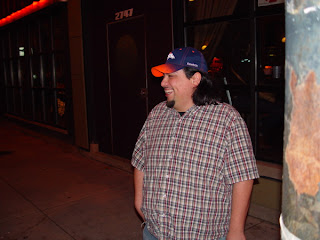 I have been floating this top ten list around Chicago parties for a while, and it has sparked much debate (mass-debate if you will), so I thought I would settle, as well as start, some debate by officially releasing the Top Ten Chicago Comics I wanted to FÜ©K of 2010! This list is to be taken to heart. If you’re not on this list, there is something wrong with you. 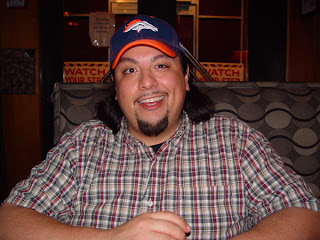 What a body of work! Too bad I laugh at him more when he’s on WCIU than I do when he’s on stage. But I have to give him credit where credit is due; his on the fly “roasting” ability and opening his living space for the cause of comedy bumped this Adonis into the Top Ten this year.
9. Jeff Steinbrunner
Code Name: The Tongue! Have you seen that thing?! I don’t care what girls might think, but he can cover a small U.S. State with that muscle! Unfortunately, he seems to be concentrating on using it more for Comic-lingus, because that tongue is sharp and delivers some serious ha-ha’s! He definitely charmed his way on my list.

8. Joe Kilgallon
I know one guy I want to take to the Back of the Yards. I don’t know if its Kennedy good looks, Irish Red Hair, or Tough Chi-Town persona, but he is funnier and better looking than any Vince Vaughn! Its like he’s the Chicago’s own Marky Mark, but in a good way.

7. Bob Palos
There’s only 1 dessert I’m interested in at the Cheesecake Factory: The Carmel drizzled Flan Man! Bob has the greatest laugh and a superb turn of phase-ology that is muy calliente. Its hard to watch him and not just grin. P.S. having an equally hot brother helps.
6. (TIE) Sam Norton, Ryan Walker & Lane Pieschel
“Charlie’s Angels” is what I call them. Three of the tastiest comic talents in the city, all living together under one roof: Hello dream home! What makes it even hotter, is that they each have hearts of gold! They are the most sincere and honest guys I know, and funnier than hell. Cum and knock on my door!

5. Dan Polydoris
Grope-tacular! Dan may not have been around as much this year on stage, but his package has! Dan is a great drinker and awesome comic. His versatility on stage including musical instruments, props, on top of his joke telling talent, makes him a must on this list. Too bad you got married bro.

6. Drew Michael
Saw his abs, and it’s a six pack of tall boys! What is it about the moody philosopher that is so dreamy? The anger, rebel attitude, and comedic prowess are what great Girl Group Songs of the 60’s are made of! (Actually I don’t think any songs were written about comedic prowess) Either Way, crazy (and crazy funny) is sexy, and makes it on this top ten.
3. Eliot Rahal
Saw his hairy ass! And it was almost as delicious as his glowing smile and strong heart. There’s also no bigger turn on than guts, and this guy has them: living in NYC for months to work and do comedy, and playing with traditional comic structure on stage… well done brother, well done indeed.

2. (Name withheld by request)
Made out with him! Granted he was black out drunk and it was his birthday, but hey, I’ll take it where I can get it. His sexiness is topped off by his brilliant comedic skill, but he totally owned locking lips with me at my own open mic! Kudos to you "BLANK", even though you kiss like a straight guy.
1. Joe Fernandez
Saw him naked! Which was just as enjoyable watching him on stage this year both in Chicago and New York. Nothing is a bigger turn on than a great comic wit and a great comic dick!

Bill will be at Red Bar Comedy Club 14th and 15th including the roast of Mike David and Kyle Lane. Also, Riot on the 20th, and LaughTrack and SideTrack on the 27th
Newer Post Older Post Home