Dan Telfer is a writer, comic, husband, father and all around mad scientist uber nerd. He has busted his hump in the Chicago stand up comedy scene for over ten years and helps produce Chicago Underground Comedy which, if you don't know, is one of the best showcases in the city. The man has performed all over the country and opened for the likes of Patton Oswalt among others.  If you consider yourself a Chicago comedy fan then it is your freaking duty to familiarize yourself with this nerd and his blatant dork style of comedy (I like to call it militant geek).  Check out this clip, then read the interview.
Comedy of Chicago: What compels you to be a stand up comedian and how long have you been at it?

Dan Telfer: Very early on I started getting the kind of positive feedback I'd been scrounging for in various kinds of comedy since 1996. This turned out to be the perfect balance of writing and performing for the dopamine factory in my brain. And I mean, I suffered through a great deal of bullshit both from others and of my own invention for many years, so I am incredibly grateful for stand-up. I've struck a really happy vein.

COC:  You have been described as a nerd comedian. What does that mean and do you embrace or reject the label?

DT:  I sort of put that label on myself early on so people would know what to make of me, because I am very obsessive and self-indulgent and I don't want to alienate people with that. But it has no real meaning. I'm good with video games for instance, but have a terrible memory so I play a lot of solo games so hardcore people can't yell at me online. I'm probably more of a general weirdo than a nerd. But I enjoy meeting nerds through my comedy a lot, so I keep throwing that word around.

COC:  I've seen you reference Voltron, Frats, Bullying and homelessness all in the same joke, where do you get your unique sense of humor from? 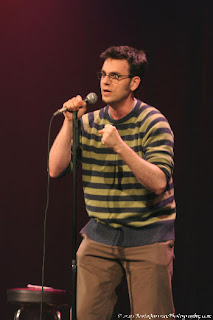 DT:  Well that joke is a story about failed metaphors, and I attempt to tell it with more successful metaphors that can only be achieved with hindsight. That's what lots of comics do, right? And I have been bullied a lot in this life because I'm introverted and I look like such a gangly cream puff. And people will put off devouring a cream puff longer if it can do a stupid dance. So I learned to be a ridiculous kind of weakling as a survival technique, and now that the brutality of youth is behind me I try to create something more whimsical with it. I do still have a dark streak in me, but you know I was exposed to Bill Cosby and Steve Martin a lot as a kid so I won't dredge up a demon without trying to make it palatable and fun.

DT:  I don't like to waste time doing material about things that bore me. Why relationships? Who gives a shit what the difference is between men and women? And if you spend five minutes trying to understand the vast disturbing reality that is the concept of dinosaurs, how can you not talk about them all day? They were around forever compared to us! We've built our civilizations on their never-ending pile of gigantic corpses! And now they shit on you and you can slingshot them at weird green pig heads on your iPhone! What the fuck??

DT:  Because it's cheap to live here, and there's nobody in business suits telling us how to make our content washed out and tedious for television. I think that's the core of it. We also have an endlessly corrupt local government to defy, thriving diversity sprung from legendary segregation, piles of pizza everywhere, a huge see-through building full of sharks, bottomlessly tragic sports legends, and other various things that inspire.

DT:  I over-wrote every joke and prayed it wouldn't make people fall asleep. When I was up there I strained to remember all the words and put reigns on my adrenaline so I could remember it later. People laughed. It was over too quickly. Most good sets since have been variations on this theme.

COC:  Who’s you favorite local comedian (besides yourself)

COC:  Seems like you've always got something in the works, anything coming up?

DT:  I'll be at the Just For Laughs callbacks at the Red Bar Comedy Club on March 10th and I will be performing with Patton Oswalt and Kyle Kinane at Comedy Death Ray at the Chicago Comic and Entertainment Expo on March 18th.