Back in May I had a first: my first open mic in New Jersey. As Joe Fernandez said in the second part of his insightful piece on the special nature of the Chicago scene, opportunity is rather different in this city. I speak from limited experiences. My inaugural open mic was in a sleepy Vermont town, to a crowd of maybe 15, 4 of them my very good friends. It's how so many first times go, and I didn't do it again until I moved here in 2009. It was free, just as is the case for nearly every open mic in Chicago. I've come to expect the lack of a price tag and an abundance of open mics, but it truly is a luxury.
For comparison's sake, in New Jersey I performed at The Stress Factory. It's a club in New Brunswick, home to Rutgers University, and minutes away from where I grew up. You may have heard of it as the last place Greg Giraldo performed before he overdosed in his hotel room. It happens to be the hotel where my senior prom was held.

Even as an outsider I got a feel for who the regulars were, but I didn't bother to ask them where else they go to get their reps in because I don't plan to be back in Jersey all too much. As near I can tell, the options for stage time are far more limited in the Garden State than the Windy City. Yet surely these guys aren't just headed out once a week for a $5 cover. If there was a drink minimum, they didn't enforce it. Nor was there a drink special. Riddled in the crowd were the complaints of price-gouging you'll see from Zanie's attendees on Yelp. No time for a tangential assessment of Yelp. 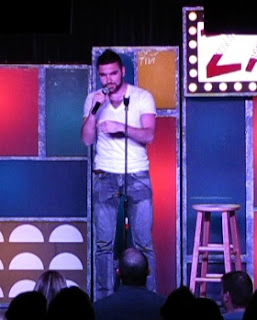 The list was pretty short—I want to say there were about 15 comics—and they give you three minutes. I showed up late but they put a friend and I on because we brought about fifteen people, and they won't argue with another $75 for the night even if no one eats or drinks. None of the comics were shithouse drunk. I wondered whether this had to do with exorbitant drink costs or the difference in those doing comedy out east.  The bartender told me attendance was much better than usual but, regardless, I was impressed as there were near 100 people there. Even when I went on later there remained a good 80, fewer comics than I am used to filtering out after their time. The less regular comics brought friends and family just as I had, and I was impressed that the majority stuck around. Perhaps they wanted to milk all they could from their $5 tickets.

You had the usual idiots talking loudly during sets, even from among those who planned to perform. One man boldly sat in the front talking on his phone. And though he was berated by Bonnie McFarlane—who, along with husband Rich Vos did guest sets—I couldn't help but think he got off far easier than he would have in Chicago. Rude people don't learn in one quick public embarrassment like that, they have blinders. But blinders also allow me to go back on a stage after receiving very few laughs. Sure I want laughs, but I don't need them. I still think I'm funny just as he still thinks what he is doing is totally normal. But while misguided faith in humor is one thing, rudeness is quite another for me, and I couldn't help but hope for him to get torn apart further. And what I experienced in wanting him to be ripped on was a pride in the Chicago scene. It has a darker, grittier, more depressing if you will, aspect to it. Maybe that comes from long Winters, maybe it comes from not being mentioned with LA and New York. And you know, out on those respective coasts, I am sure they think their scene is special too. 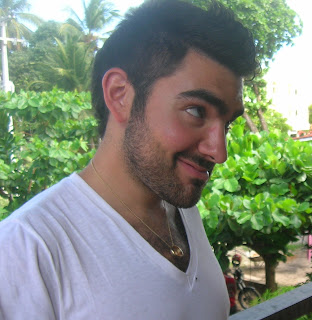 I'm not much of a laugher in a lot of cases. I'm too busy analyzing, or too tightly wound up thinking what I should say, or worrying that someone just said a joke too close to mine. It probably makes me look like a dick. The last thing I want to be asked is what I thought, or to hear from someone they thought I was funny, even though it's the only thing I want to hear. At The Stress Factory, laughs came aplenty from the audience and even, for a change, from me. Being with your oldest friends helps. But I noticed something. I laughed the most at the comics who were a little different, guys I would expect to see out here. They might not be doing the showcases, they might just be a regular at one or two bars. Others got laughs where I knew they would stew in silence in Chicago. Maybe it's Chicago's influence on me, or maybe it's why I've ended up in Chicago. Probably it's a little bit of both.  I had the same feeling when I attended a lot of the TBS Just for Laughs' events last year. All of my favorites were the local comics I knew already. I don't think it was just homer mentality. What you get out here is really different. I'd love for Chicago to become a stand-up mecca of its own, rather than just a springboard, but maybe that changes the dynamic and makes it less of a breeding ground for what I see as such original talent.

One day I'll leave. It might be for comedy, but probably not. And when I'm fiending for a fresh comic voice, I'll make my way back here, slide into the back of a dim room, and think about how the PBR's used to only cost $2.
Newer Post Older Post Home