UPDATES GALORE!    There are some great comedy options going on in Chicago this week, our open mic and showcase lists have been updated to reflect the new additions and we've been getting lots of requests to plug some of the upcoming shows so here we go: 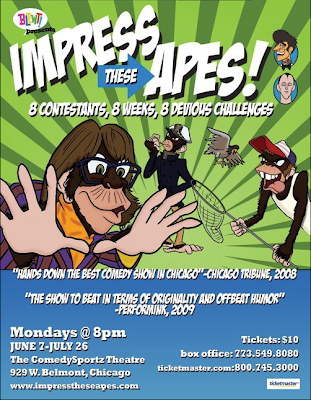 Only $5, "Suggested"  What!?  That's a ridiculously cheap cover for such a stacked line up.

Impress These Apes -  Comedy competition - 8 week run ends July 26th,
Mondays @ Comedy Sportz
Heard great things about this show, catch it before it's over, here's the press release: Impress These Apes is an 8-week talent competition of epic proportions! Eight unique performers from Chicago's diverse performance community will compete weekly in an intense talent challenge - each time judged and scored by hyper-intelligent apes from the future. The contestant with the most points at the end of the run wins $500 cash money, a grab bag of groovy prizes, and the coveted title of "LEAST PITIFUL HUMAN!" 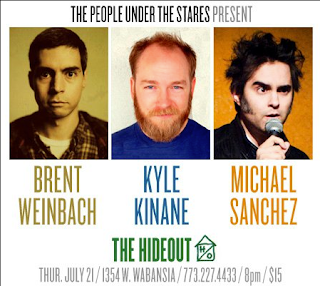 We did a review of this great new monthly a few weeks ago, so we won't rehash the all details other then to say it's that it's a very solid production at the douche free Trace Bar in Wrigleyville You should check it out, this months line up features: Julia Solomon, Jesse Baltes, Megan Gailey, Bill Cruz headlines.  Hosted by Lane Pieschel and Jeff Steinbrunner

People Under The Stares - Monthly Showcase, Thur 7/21 @ The Hideaway 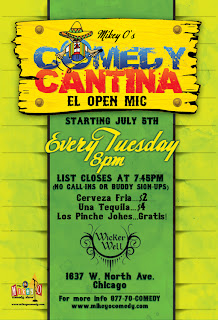 OK so we'll admit we knew nothing about this showcase, which is produced by  local record label Drag City, until they contacted us, but  it turns out they have had some top notch comedians perform in the past, Thursdays show is no exception with Kyle Kinane, Brent Weinbach and Michael Sanchez, check their face book press release:  "The People Under the Stares is a monthly comedy showcase at the Hideout in Chicago, presented by the unusual gang of idiots at Drag City Records.  Alumni include Zach Galifianakis, Paul F. Tompkins, Morgan Murphy, Hannibal, Bonnie "Prince" Billy, Brent Weinbach, Fred Armisen, Neil Hamburger, etc"

Jokes and Jam's - Monthly Showcase, Fri 7/22 @ Mullens
Have not been to this yet but the word is it's a solid, fun showcase.  This months lineup features: David Drake, Khaleel The Comedian, Ali Clayton, Jack Calhoun, Drew Michael, Hosted by Stacey Norgren and Jerry Legan