Twice now the posts I've written have come quite close on the heels of impassioned posts from Joe Fernandez. As much more of an unknown on the scene than Joe—and yes, I feel weird using Joe's first name since I met him only once, and briefly—I admit I had some trepidation at first writing in here. Who's this fucking guy writing this shit? And then I remind myself that everyone starts out an unknown, and it's just a blog.

I like to think this segues well from Joe's most recent post, but segues are not always my strength. That post, and a comment on it, relate to being a hack. The comment is from a new comic and concerns his fear that not only his jokes will be hack but that his fear of being perceived as a hack makes his fears hack. I rather enjoyed this sentiment because I think it means he's in some ways on the right track. Of course you want to be thought of as original and embraced by those that you respect and admire. But there is an inevitability of collision concerning joke concept if not structure, whether you are an amateur or a veteran.

I am not the student of comedy I really should be and yet I frequently encounter instances where I think I have heard a joke before. Yes, as I just mentioned, there are only so many things to talk about and so many angles you can take, but every good comic has a style that is just enough their own that even when Comic A is discussing the same topic as Comic B, you should be able to tell they arrived at their conclusions independently. When it's not a coincidence, we enter that ugly realm. I've written scores of jokes only to see the content talked about in a very similar and, often, better way than my own take. It means I will very likely scrap the joke, but I happen to like this, because it means I need to stretch my brain more. Now, in these instances, it's very unlikely these comics took these jokes from me, unless they happen to inhabit my bedroom when I leave my jokebook in there. Were I a more prominent performer, this thing might consume me, but I'm of the school that it shouldn't. Much easier said, though, than done. 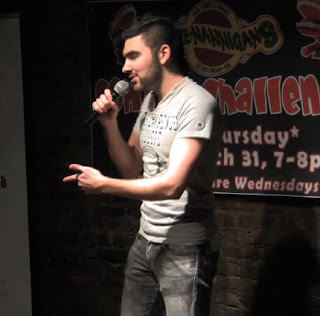 Just the way that Joe discussed a hack is known, a thief is known. It's more of a Venn Diagram situation than it is two separate categories. And in just the way that some hacks will survive and even thrive, so too will the thieves. In America the idea is that we root for the little guy, the underdog, the unsung hero, but just as cream will rise to the top, shit floats. As maddening to me as it is to see awful comedians, awful actors, or just plain awful people rise through the ranks, it's worse for me to see so many of the amazing people go underappreciated. That they keep going is part of what makes them amazing, but even as a depressive type, it can get a little too depressing for me. As in other realms, in comedy it almost never unfolds like an Ayn Rand novel if you stick to your ideals. You want to fight the system but if you want to be a success to the point where comedy pays all of your bills, you're going to need someone lobbying for you and the first person that can do that is you.

The problem, and I speak here from my own inadequacy, is going around thinking that merit stands on its own. That if you just keep at it, someone will notice. They might, but if this is what you want, you are going to have to go out and kick it in the balls. You are going to have to lobby for yourself. I know, I just said this, but really, it's true. With extremely rare exception, everyone is doing dozens of shit rooms, even when they're well on their way. Someone might be lurking in the back, waiting to thieve your joke. But you'll go a lot further coming up with new material than you will hating the asshole who stole your joke.

Even where I was going with this seems thieved from a post from comedian Rob Delaney on Splitsider, but it was on my mind already, I promise! Because see my friend was just telling me how he'd taken a comedy class and his teacher had lifted some material from him. And even though that's true, when you go around explaining yourself like that, you seem guilty. On the other hand, if you don't explain it, someone will probably accuse you anyway.

To me, it boils down to this: bad comics can write great jokes, and great comics can write bad jokes, but only assholes steal jokes. And I'd rather be a bad comic than an asshole any day. That's why I like Chicago.