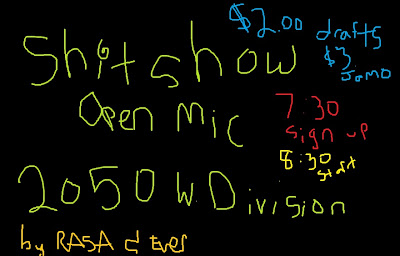 Time for some more plugs!  Well it's that spooky time of year when summers gone and winter is on it's way to freeze your balls/tits off.  You would think there would be less going on but in fact there is more cool shit happening in the Chicago comedy scene then ever.  From new showcases, to open mics to brand new high profile comedy venues, speaking of which Laugh Factory Chicago has a Facebook fan page !  Hope to get details on shows soon.  We've been getting lots of requests to plug shows/venues so here whats popping in the next few weeks.  The popular Monday night open mic "The shit show" is having a "Monster After Open Mic Dance Party" on Halloween night.  I've heard nothing but great things things about this room, should be a flat out bananas type party.  Check out the amazing graphic above...now read the press release.
"The ladies at the shit show are throwing a party!!!! The hostesses with the mostest present the after shit show first annual Monster Mash!  Monday night's place to be open Mic is hosting a spooktacular after Mic dance party October 31 at 11:30 pm. Located at Shambles bar (2050 west division) this party will have you shaking your booooty off!! $6 burger and fries and $2 off ALL drafts and $3 Jameson shots.  Plus prizes to best dancer. You don't have to dress up, but costumes are encouraged."

Here's what else is coming down the pipe:

Tim Minchin (Think Reggie Watts meets Billy Joel) will be performing at The Vic Theatre in Chicago on November 10.  Check out his clips....
Funatical Comedy Tour - A interfaith family friendly comedy show coming to town November 5th
Comedy Central Pilot Competition looking for Chicago participants...
Laugh Factory Chicago has a Facebook fan page up!
The Second City's stand up comedy club "UP" has a new website with shows slated for December
SMUSH a Improv/Stand Up Open Mic every Monday at The newly renovated Stage 773
Marc Maron: The Voice of Something - A documentary on a day (09/11/2001...yeah really..) in the life of Marc Maron by Jodi Lennon - November 8th and 9th @ Annoyance Theatre