People I Hate In The Scene: By Matt Elfring 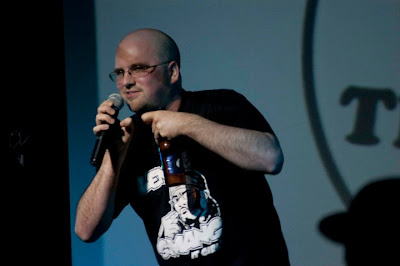 Get ready for a heaping plate of gossip! I'm going to bust this scene open like a coconut with some juicy scoops! If you're still reading, that means I didn't get my new show on E! or Bravo or some other fucklame network. In all seriousness, there are quite a few things I hate in the scene.  I don't hate specific people, so if you're all expecting me to talk about how much I hate Lewis Rhine, then e-mail me personally. Now, I'm not trying to step on Ed's shoes here with a hate list, but I'm going to anyway. Here's some specific types of people I fucking hate in the scene.


1. People that always say "well, who are you?"
At least a couple of you are thinking "who the fuck is Mat Elfring?" You're the people I hate. I'm Mat Elfring, a member of Prattle Rattle, a producer of A O.K. Comedy in St Charles, Il, a sometimes comedian for 7 years now, and a professional writer. Now you know who I am. There seems to be this sense of entitlement in the scene where people think they're hot shots because they've headlined a show at Bob's Bar and Grille in Lockport last month Does this place exist? If so, I want to headline there).  If you're a great comedian, good for you. The scene can use as many good comedians as possible. But why do some people get a huge head about it? What's the purpose of that? We're supposed to be doing the same thing: Make people laugh. Just make people laugh and chill the fuck out. Worry about who you are on stage and less about the newcomers or the people you've personally never worked with before.

2. People that never turn off 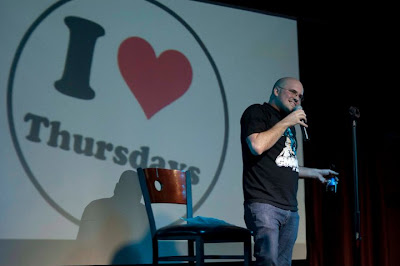 I love shooting the shit with other comedians after a show, especially at the venue I produce. Last show I was booked at, I ended up just hanging out with Xavier Lamont, Charlie Stone, and Ben Stach (who the fuck is he?) having a good time and just giggling. We did this for about two hours. What I really liked about it was that these are down to Earth cats, and while we may talk comedy here and there, we talk about any topic under the sun.  The best part of this was that they acted like normal human beings. So many times, I've ended hanging out with comedians, and there's always one guy who's tries so hard to be exactly like the guy you saw on stage earlier in the night. All they do are bits. There's no real conversation, only jokes. Sure, as comedians, we're always trying one-up each other and make each other laugh, but there's a sense of sincerity behind it. It doesn't feel like we're auditioning for each other, except when you're the guy who doesn't turn off.

3. People that ask to go up every week

As a producer, I, and my other producers Eric and Mike, have three goals: To put together great, fresh line-ups for our audience. To give any comedian who wants it a chance on our stage. To make the venue money, so we can continue having our show there. That being said, there are quite a few comedians who want stage time, and we try our best to give it to them. We have a show twice a month, so we want to keep the show as fresh as possible for our audience, so they don't get bored of the same five comics and never come back.  We have a small handful of comedians, whom we've had up once or twice over our year of being a show, who hit us up weekly for stage time and sometimes, they say some pretty shitty things. Nothing will get you ignored faster from a producer than being a dick head, and sometimes, it goes the same with asking every week. There are hundreds of comedians in the area and if they want to go up, we try our best to make it happen. Sure, there are a few people we've had up numerous times because our audience loves them (Matt Drufke, Lewis Rhine, Joe Motisi, Bob Jay, and Marty DeRosa) and the audience is the number one priority. So if we say "we'll get back to you because you just went up last week," leave it be and wait.

4. Mat Elfring
Self-entitled douchebag. hope you die bro. He didn't even put pictures in this article.  (Editors Note: Don't worry Mat, we did it for you)