Plugs For The Mugs...

OK, I haven't posted in several days but there is so much going on, both in front of and behind the scenes, that it's hard to keep track of it all.  Right now the Chicago Comedy scene is like some kind of freshly born, sticky, stumbling, Frankenstein monster that's breaking it's way out of the fetid belly of a madman's laboratory.  Your not exactly sure which way this mutant motherfucker is going to run, but you know it's about to tear some shit up in that quaint village down the road.  Add to that the fact that this suspiciously mild Holiday season has passed by faster than Herman Cains ethical credibility which means I've been busier than a one legged hooker at a Orthopedists convention.  So... I will try to just keep this simple, with a couple of quick notes and plugs for all the noteworthy events/shows that are popping off in the next few weeks.

"In Living Color" Chicago auditions at the Laugh Factory: Damn! A WHOLE bunch of people showed up at this cattle call audition for the reboot of the famous 90's TV show.  This iconic show started so many amazing comedic careers and many of the talented folks who arrived for the auditions also grew up watching "In Living Color".  So to get a chance to participate was very exciting for many.  Hundreds of people were lined up for hours, but the inside word is that auditions took place in the very front of the unfinished lobby.  No one got in to the actual theater space of the new Laugh Factory since it seems they are still working on getting the venue ready.  Good luck to all who auditioned. 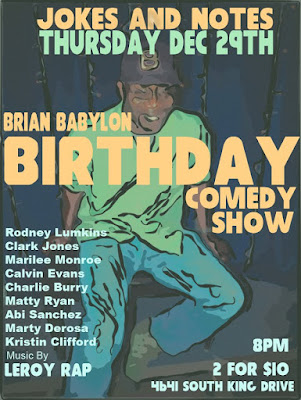 Brian Babylon Birthday Show @ Jokes and Notes:  When I first started doing this comedy blog thing, Brian was a guy I would see around just about every showcase and open mic there was.  He does stand up, he hosts a radio show, he produces showcases.  Not sure what this cat doesn't do.  I do know his birthday show is coming up this Thursday 12/29/11 at the great Jokes And Notes with a power house line up that should not be missed.

It's clear that Hannibal, who is touring the country, will be a superstar.  Watch him at affordable local shows while you still can.
The Hideout: 1354 W. Wabansia Ave, Chicago, IL 60642

Up Comedy Club LIVE Showcase Auditions: Jan 3rd, 2:30 Sign Up
Unless you live under a rock you've heard of Second City.  What you might not know is they now run a comedy venue called "Up" and that comedy club is having a stand up showcase audition.
"Come to the UP Comedy Club on January 3, 2012 at 230 W. North Ave, 3rd Floor of Piper's Alley and audition live. The sign up starts at 2:30pm, and we'll see comics from 3pm to 6pm. Judges will cast their votes and the top eight will get a slot in the Next UP Chicago Showcase Show on Thursday, January 12, 2012 in UP."

The Famous Junior Stopka Website:
This butt nut crazy mother is either going to be insanely famous or crash and burn in a blazing ball of glorious hell fire.  Catch his crazy train while the going is good and go to his website which has links to all of his funny ass cooking podcasts and upcoming shows.

Coles Bar NYE Party, FREE:
Now technically this is not a comedy event, but this bar does host one of the best open mics in Chicago and the fact it's hosting a FREE New Years Eve Party is pretty dope.  But get there early because space is limited I'm sure.  "This New Year's Eve, come close out 2011 and step into 2012 correct!
It's The GetDown: OFFICIAL FREE NYE All-Out Dance Party @ Cole's {(air horn)}!!!
That's right...FREE. No Cover from 10pm-3am!  DJs: Mass Transit, ShAde and D-Rek spin the choicest eclectic selection of Hip-Hop, Funk, Boogie, Disco, and Old School. {{ WARNING: This is New Year's, so we Get[Extra]Down }} 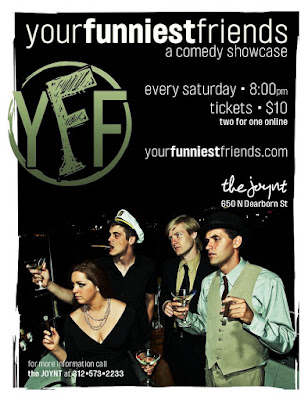 Dan Telfer Live @ The Mayne Stage
Comedic workhorse Dan Telfer, who we have had the pleasure of interviewing, will perform at the plush Mayne Stage in Rogers Park.  "Dan Telfer has been writing and performing comedy in Chicago since 1996. He's toured as an opener for Maria Bamford, Brian Posehn, and Patton Oswalt. His debut CD EP "Fossil Record" was released in 2010 on AST Records as a split release with Greg Proops and Paul F. Tompkins. Fossil Record was an iTunes Bestseller and was named by The Onion AV Club as one of the Best Comedy Albums of 2010 and Paste Magazine called Telfer "The Best of What's Next." He was named "Best of the Fest" in the 2011 Chicago Just For Laughs Festival and "Talk of the Fest" at Montreal Just For Laughs.You can now see him as host of The Onion AV Club's new pop culture travel web series, Pop Pilgrim" - Jan 6th Live

Comedy Saves Showcase:  You gotta give credit where credit is due and the producers of this newish showcase have been working hard to deliver a quality product so they deserve some attention.  A chic venue with local craft beers, authentic English pub fare and solid comedic booking makes this showcase worth a look.  "GREAT BEERS! GREAT COMICS! GREAT ROOM! GREAT FOOD! Make it a great Thursday with Comedy Saves!  3$ to get your face in and 5$ for two faces!  Call Blokes and Birds for a reservation! Do IT!  Blokes and Birds (3343 N Clark St.)"

Atomic Comics: Masters of The Humorverse Live @ Mayne Stage
Another promising show @ the Mayne Stage.  "Atomic Comics: Masters of the Humorverse showcases the most talented performers in Chicago. The first performance features comedians Candy Lawrence, Chris Condren, Abby McEnany, Carrie Callahan, Dan Telfer and host Ever Mainard.  Creator, Nellie Huggins, moved to Chicago to study writing and improv at The Second City Training Center. She is a regular contributor to Gapers Block, where she writes about all things comedy."