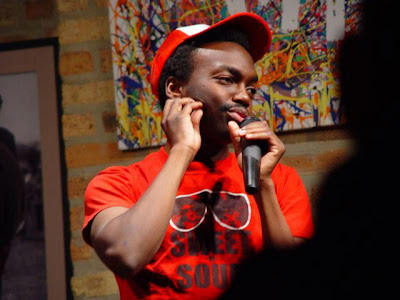 21 Favorite Bits of 2011
It was one of those classic comedy car-riding moments. Jesse Baltes and I are headed to Algonquin when out of nowhere Berlin was mentioned and the following happened-
Both of us: Berlin? But isn’t that…isn’t that…a gay bar?! In most cases of spontaneously quoting a Joe Fernandez joke two people make out, skip the bowling alley show, and move to New Hampshire to wed but instead it inspired me to present my 21 favorite bits of Chicago comics I heard in 2011. These are the jokes you have to repeat or can’t seem to forget, the classics you wish you had written, and the ha-ha’s you hear at a show or open mic that later on spark sense memory.  Try to think about Holocaust without remembering Drew Michael finding it hilarious or having a joke bomb and not send up to Charlie Bury with a “new stuff my liege.” Or maybe almost die and ponder WWSFD? (What Would Sean Flannery Do?)

This actually took me several months to come up with because it was so hard to narrow down. With that said now in no particular order…well, except alphabetical are 21 of the best jokes of 2011.
Adam Burke – Recession Otter
Right now the visual of Adam Burke swimming like an otter is in your head staying afloat on struggle as the rest of us go up the shit creek without a paddle or savings. WE ARE THE 99%! No? OK…

Kenny Deforest – Adele
You know when you’re listening to an Adele song and you’re like “wow, she must be pretty hurt for a chubby British girl” and then you find out she only dated the guy she wrote 21 tracks about for 3 weeks and you wonder what that guy must have felt like? Kenny DeForest examines it and makes probably my favorite proclamation that I can only hope the real dude said with, “I never said anything like that!”

James Fritz – White Guilt Firefighter
Being from the south, I’ve witnessed a lot of injustice and even more white guilt. Fritz creates the ultimate in white guilt scenario with a southern white firefighter having to put out a black kid. Jesse Jackson will probably protest this joke one day.

Megan Gailey – Jersey Chaser
Gailey paints a picture of the perfect life as a wife of a baller who gets cheated on which includes diamonds being poured on her tits and going to exotic locations after being cheated on.

Danny Kallas – No A’s
The pride of Elmwood Park walks us through his high school career and how he never got any A’s except the one his principal yelled at him. We also learn how long Chipotle has been around. See, it’s a history lesson as well.

Joe Kilgallon – Dance Off
I enjoy stories especially ones where you learn a lot about the comedian telling it. In this we find out Joe is a great dancer, likes to drink (if you didn’t know that already), and will Michael Jackson kick the shit out of you if you challenge him and get too close when he’s in the groove.

Lisa Lauretta – Bro Altercation
The first time I saw this joke was at Globe Pub Open Mic (IT STILL EXISTS) and it is a hilarious endeavor of how to handle drunk bros on the street trying to get a late night slice of puss. Lauretta does a seek and destroy in this bit and it can warm any bro’s Natty Lighted heart.

Mike Lebovitz – Anything about his dick
IT FUCKING TRENDED ON TWITTER!

Ever Mainard – AMIRIGHTLADIES
Ever is a fireball of comedy and seeing her play it straight for…lack of better term is wonderful. Have you met her boyfriend by the way? They have a fun time with laundry with all those blood-stained towels I’m sure.

Will Miles – Train Ad
We all have seen the ad on the el to watch your backpack with the black dude looking suspicious of the contents and Will Miles wants black dude to know to not be afraid because it’s probably just knowledge. I love it.

Lane Pieschel – Starbucks
We all have had a shitty job in our lifetime. Lane has had one on top of being stabbed at his mailbox. If you’ve ever wondered how Lane stays so thin we do find out that it is a steady diet of coupon clippings and listening to yuppie women argue over who pays.

Puterbaugh Sisterz – Bush
You get both Puterbaughs doing a radio ad, talking about Gavin Rossdale, and of course singing soulfully.

Matt Riggs – Ghost of Jared Past
The award for most committed act out has to go to Matt Riggs ordering Subway as the ghost of Jared Fogel past. Complete with rattling chains, Subway better cash in on this while they have a chance.

Matty Ryan – kidnapping a kid
When you think of kidnapping cases like that of Elizabeth Smart you would imagine the captors manipulated the victim, threatened them, but in the case of Matty Ryan he would give the kid a nickname and let him play video games all day. If any 8 year old gets nabbed in the city they better hope it’s by Matty cause they’re in for a fun time.


Rene Schultz – Shittens
I remember being backstage with Jamie Campbell at 100 Proof and Rene was on stage doing this bit and we were like two schoolboys eagerly anticipating her saying the word “shittens”. Anytime I’m in a public facility and look at the TP this joke comes to mind. And the homeless dude jerking off next to me.

Nate Simmons – Johnny No-No’s
This is one of those things I sincerely hope happened in real life or at least soon will. Anything involving Nate and strangers will usually end in a dog being pet or a person being thrown in a dumpster.

Junior Stopka – School Shooting Bully
Junior Stopka is a hero of mine in the department of the late Patrice O’Neal where he can say something terrible and it still remain absolutely hysterical. In this joke he pieces together the fact that if you can knock books out of a nerd’s hand you should be able to knock a gun out. It is logical sense so step your game up high school bullies.

Hope you all enjoyed and feel free to add your own list. All in all have a Happy New Year and see you when the world ends, bitches!