Lil Rel will blow up your spot... 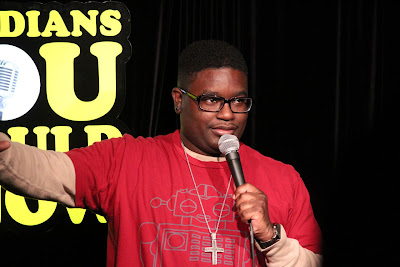 I caught "Lil Rel" Howery performing at the "Comedians You Should Know" showcase last week. Well... I won't beat around the bush... the man blew the door off the room. No exaggeration, Howery killed the place. Folks in the club went bananas as he smoothly bounced from bit to bit looking as relaxed as any comic I've seen while strategically destroying a room.

His timing was spot on and his material, while at times of the standard "my family be crazy" variety, is delivered with Robert De Niro caliber method acting brilliance. Howery flips what at times could be an average joke inside out, twists it up like a balloon animal, transforms it into a giant pony at a children's birthday party, puts a saddle on it, then hops on and and rides that fucker up to another level.

Howery has been a semi-finalist on NBC's "Last Comic Standing," participated in the Just For Laughs Chicago Festival as well as the NBC Diversity Showcase, Comedy Central's "Russell Simmons Presents Stand-Up at The El Rey" and Diddy's "Bad Boys of Comedy." He's been in Hollywood movies like "Barbershop 2" and tours almost everywhere performing comedy all around the country.  In short the guys a real pro with a stacked resume from over a decade of hustling in the comedy game.


But I was slightly unnerved that the following question kept popping up in my head while he dropped comedy napalm all over the stage. "Jesus he's good, why haven't I seen him at more shows up here?" Then I thought about it. In 2 years of covering the comedy scene in Chicago I've only seen Lil Rel Howery perform once, and that was barley a month ago at the Jokes and Notes, comedy club (which is a must go venue for any serious comedy fans) on the south side.

I've NEVER seen Howery perform at any of the north-side or downtown showcases and I've been to ALL of them numerous times.  I'm not saying he's never done any, and I don't pretend to know the man's schedule, but I sure havent seen or heard of him doing any of the big rooms.  Not The Lincoln Lodge, not Chicago Underground Comedy, not Mayne Stage, not Comedy Bar, and Not CSYK (before last week, and kudos to them for booking him).

I know Lil Rel performs in the Just For Laughs Festival, but that's not were talking about.  And again if I'm wrong somebody correct me, but it's a shame a local comic the caliber of Hannibal Burris and T J miller is not being utilized by showcases that are always looking to put butts in seats. I love my north-side showcases but some of you are booking the same comics over and over, that shit gets OLD fast. 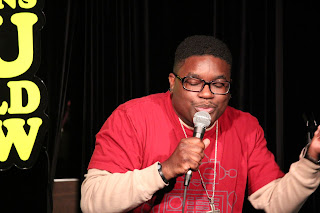 I thought it would be important to hear Howery's side of things so I contacted him and he was cool enough to rap on the phone with me while at the airport in Orlando Florida. What was he doing down there? On his way to a packed venue for a show of course. When asked about performing more shows up north Howry said this. 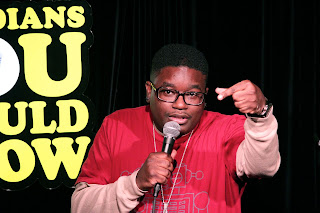 "Yeah I plan on doing more when my schedule allows it.  It's not about the money since rooms on the north-side don't pay shit compared to venues on tour or on the south-side. My good Friend Hannibal Buress suggested I do more rooms up north because it makes you a better artist. It's about getting better and being able to delver and connect to a wider, main stream audience which is what I want to do at this point in my career, and plus I'm having such a good time on stage doing my thing."

Howery did say he is planning to do a show at the comedy bar and was contacted by the Lincoln Lodge as well. This of course brings up larger topics. Yeah I know Chicago has issues, decades old segregation, a history of racial divide...blah blah, boo hoo. Get over it, it's 2012 . If your a comic, Hustle (meaning do ALL rooms black, white, Latino whatever). If your a producer diversify (meaning book top quality comics of all races). If you do this on all sides, if you come together as one united, vibrant, creative scene that utilizes all the talent in this great city; you will reap the benefits TEN fold in an amazing comedic renaissance.

What I'm saying is everybody needs to get together and make a mixed race comedy baby dammit! You can start with Lil Rel Howery. He will put butts in seats and make everybody laugh to the point of exhaustion.  Your show will be so much the better for it.