"Never Been to Paris" at Comedy Bar

Went to Sean Flannery's one man show, "Never been To Paris", last Thursday, which is on a run until March 15, at the Comedy Bar. Flannery was named the Best Stand-Up Comic of 2010 by the Chicago Reader, which means he's been honing this craft for quite some time and is firing on all cylinders at this point of his career.  In "Never Been to Paris," Flannery combines masterful storytelling with multimedia presentations to recount several near-death experiences that he miraculously survives.  Matter of fact I did a little research, and it turns out that his one man show has been reviewed many times from other runs at venues like the Lincoln Lodge and the Chicago Center For The performing Arts.  So instead of regurgitating accolades and trying to think up of clever new ways of writing what has already been said.  I decided to take a page out of Flannery's multimedia playbook and recycle bits and pieces of other reviews (with credit of course) with my own take. Sound weird? Good!

If you don't know the premise of the show this excerpt from his interview with Gapersblock sums it up nicely. "Flannery is both a warm and hilarious storyteller; the show spins what seem like tall tales but in fact are real-life experiences of the baffling number of ways Flannery has nearly killed himself (or friends, or siblings), as well as other just plain dumb things one does when drunk and lives to tell about (don't we all have a Taco Bell parking lot story?). The show also features the only acceptable use of a Power Point presentation."  Yep, that's pretty much what the show is all about.  But it's a lot more interesting than you would think tales of drunken debauchery would be.  Flannery's Wit and Charm goes a long way. 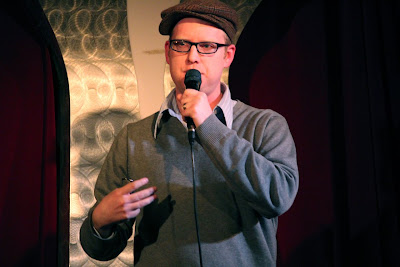 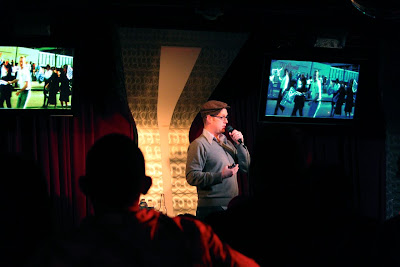 This excerpt from a Timeout review dissects the intricacies of the overall plot and themes.  "Flannery's story is very much about family. His first generation Irish-Catholic menagerie includes a handful of fresh off the boat racist uncles, a social worker dad who body slams his children and five younger siblings, many of whom have gotten into plenty of trouble of their own. At the center of the storm is Flannery, an imbibing imp who gladly swaps job opportunities for nights at the bar, gets knocked unconscious at the mall from sucking on a 75-volt battery and mistakes 9/11 for a DePaul University bomb threat. As an audience, we wait for the come to Jesus moment, the third act realization that living for the moment has its consequences. The hook in Paris is that one can self-reflect or one can order another round. Flannery happily chooses the latter."  Well said.

And finally the Center Square Journal has this to say about his warm delivery style. "Flannery has a particular Midwestern charm that makes you feel that it's OK to be a heavy drinker, and that’s basically what Never Been to Paris is about. The show recounts the many near-death experiences he’s had while under the influence. Somehow Flannery has been fortunate to escape every incident completely unharmed.  The stories are told with the genuineness of someone sitting on his front porch talking to a bunch of old friends. But Flannery takes it one step further, enhancing his tales with a photo slide show, some animation, and audio clips. “I’ve been telling people it’s a bit like watching someone show his vacation photos and share the back story to each picture—if the man nearly killed himself 10 times during that vacation,” he says."

See? What can I add to these flattering descriptions of Flannery's terrific show of which I totally concur with?  Do yourself a favor and check out his latest run at the Comedy Bar which is probably the swankiest venue he's performed this show in to date.