Stand up comedy is hard.  There’s no team to help hold you up or to blame shit on. It’s just you, a stage, and a room full of mouth breathers judging your every move and utterance. This isn’t to say that only the ballsiest or vaginaiest folks out there should give it a shot. If you have the urge to get up there and make people laugh then I applaud you. Let’s get started.

First things first; It’s one thing to be funny amongst your friends. Congrats! You’re the tallest midget. Sadly, you’re not the second coming of Bill Hicks. I deeply wish you were, though. Mr. Hicks was a genius. You will have jokes that land flat, you will be heckled, and you will get frustrated. Welcome to comedy! If stand up was easy it’d be called... I don’t know, think of something easy. Comedy may not be easy, but it’s not that hard either. Take Jamie Kennedy, for instance. People pay that man to be funny. They. Pay. Him. That’s like getting a one-armed surfing shark attack victim on your rowing team.

Now that we’ve established that Jamie Kennedy is a blemish on the face of comedy and you’re not Lazarus Hicks, the next step is material. The sky’s the limit. Watch some of you favorite comedians. Rewrite some of the jokes you hear to get yourself started. It’s delightful, you get to watch stand up as “research”. However, under no circumstance should you take those jokes to the stage. Stealing material is lower than low. If you can’t come up with your own material join a cover band. That’s it! If stand up was easy you’d call it coverbanding, or something. Keep your material poopy. (What a happy little typo). When you’re telling friends a story they’ll wait for the joke but on stage you have to keep the audience’s attention. So tighten that shit up. If you have a punchline every 30 seconds that means 6 jokes in a 3 minute set. Boring! Writing can be daunting at first; just staring at a blank sheet of paper will all it’s potential. Then you write something and immediately hate it. Welcome to comedy. Put your own judgements aside and trust your gut. If it makes you laugh chances are it will make others laugh, too. A small notebook and a pen are vital. Have them on you at all times for inspiration is fleeting and your short term memory sucks. Get a lot of material down first then cut it back to your best 3 to 5 minutes. Be prepared with plenty of material or be ready to drop some jokes as stage time dictates. Open mic times are not always the same length. Don’t throw away anything, however, it may come in handy later. There’s nothing wrong with recycling old material. Example: I didn’t know Penn State was a Catholic school. See? Old material can still be useful one day.

Before you perform at an open mic go and observe one. Preferably the one you plan on making your debut in. Notice the details and pay attention. You will feel better seeing it in advance so you can picture it later. It’s a place to practice. If you wait until you’re ready, you’ll never take the plunge. Accept it and take your shit to the stage. Chicago is awash with open mics. There’s one in the city almost every night. Comedyofchicago.com has a great listing of some the places around town that run open mics. Check it out, pick a day, puke, sack up (or lip up) and get on stage. It’s ok to be nervous, most everyone else there is, too. 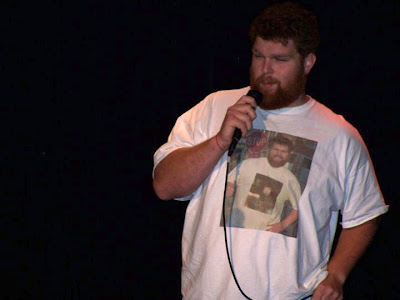 Do you have your 5 minutes of material? Great. Now take a look at the huddled, unwashed masses. Soon, you’ll be staring back at them with a microphone in your face. Is there a half-ling in the crowd? Drop the awesome midget joke you spent all yesterday crafting. That’s ok, you’re smart and didn’t come with exactly 5 minutes of material. You have other jokes you can plug into that open midget joke slot. What’s that you say? You don’t have anything else? Time to write some new shit and quick. It’s one of the most important parts of the job, reading the crowd. Loosen up and be sure to be at the venue ahead of time. Chat up some of the audience members in attendance. Get a feel for the people you’ll be performing for. Change up some of your jokes if you think they may not work. Conversely, it’s also a good time to try out material you’ve been holding back on if you think it will land with this audience. Worried about how much time you have? Don’t. They’ll shine a light in your eyeballs when it’s time to shut up. The light means “wrap it up and piss off, please.” Now is not the time to shoehorn in the hilarious tale about the time your grandma attacked a panda at the zoo after she punched a cab driver because she drank all of your Robitussin and thought the guy had taken her wallet, when, in fact, you’d paid for the cab. See? It’s obnoxious. They want on to the next comic (topic).

Still want to do stand up? Me either, but we forge ahead. On to the next horrible, miserable failure. In time you’ll become much more confident; on stage and on the streets, yo! People pay to hear comedians, even shitty ones (I think about Jamie Kennedy too much) speak. Everyone wants that distraction a comedian offers. People need to laugh and you are the right dick or vagina for the job! It just takes that first step. You’ll be glad you did. One last thing...wait, I forgot. Probably wasn’t all that important anyways. Oh yeah! Welcome to comedy!