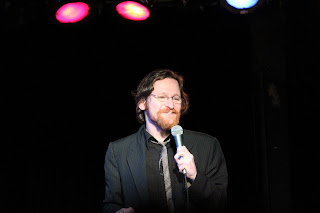 On a rainy Tuesday night not unlike those of his native Northern Ireland Adam Burke took the Beat Kitchen stage for an hourlong Unlimited set for Chicago Underground Comedy. The Unlimited format highlights a veteran Underground cast member and allows for a longer set than the usual showcase time slot. Burke has been a fixture of the scene for years – even running the popular open mic at Cole’s with Cameron Esposito - and as a fan it was rewarding to get to see him try out all sorts of material. The show was recorded on video as Burke prepares to record his first comedy album in April.

Local standup and current Underground member Chad Briggs brought his linebacker frame to the stage first for hosting duties. Mr. Briggs was handpicked to host by Mr. Burke and was an effective choice. The two comics are great friends but Briggs, a native Texan, also played the perfect foil to Burke’s heady British wit to follow. Briggs won the crowd over with a story of his “Jimmy Buffet-y-est” moment, followed up with clever bits about old fashioned handjobs and the #49 Western bus.

Local sketch group Think Tank, also handpicked by Burke, slid into the feature slot and performed four sketches. All were well received but they finished with their best – a piece where Pete Stepnoski portrayed a middle school Pictionary coach giving a halftime speech. Really funny.

Then it was Burke’s turn to inject some of his worldly charisma into the proceedings. 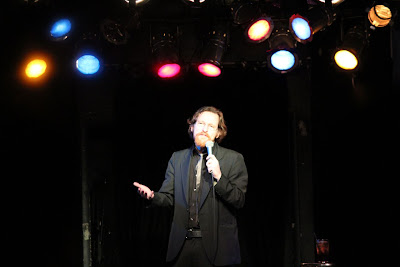 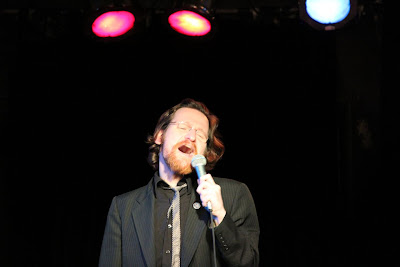 In spectacles and tousled locks the self-described “Brothers Grimm woodcut” took on agnosticism, Chicago winters, the Lollapalooza DJ tent and a wonderful sports bar called Pledgy McGee’s House of Punching. He gave an outsider’s perspective on American football and asked why it is permissible that the quarterback keep a copy of the playbook on his wrist like a newbie waiter. The most enjoyable piece of the evening for this writer was Burke’s simple but inspired reason for hating Osama bin Laden: not because of 9/11 but because he was a rich kid. Succinct, warped and perfect.

The term professorial comes to mind as you watch Burke at work. For starters, he has an accent that isn’t native to the suburbs. Then you notice the vocabulary. He actually used the word sesquipedalian at one point. It’s apparent that Burke started as a writer. Many of his jokes are crafted like prose, his one-liners lyrical. And his subject matter can get relatively high-minded. There was the impressive and, to all outward appearances, improvised bit where Burke posed art history questions to the audience and riffed for a solid two minutes on Van Gogh (apparently we haven’t heard the full story about the ear-lopping). The guy is smart. But not above punning.

Burke asked how much time he had left at the 57-minute mark but the crowd wasn’t ready for him to quit. So he launched into more material. You got the sense that even after an hour and ten he still wasn’t near the bottom of the well yet. His comedic dismount centered around a booze-fueled competition called The Jagger Off where Burke, with iPod accompaniment, illustrated the various moves of the Rolling Stones frontman, complete with pursed lips and jutting elbows. It was hilarious and the crowd was blown away, as if the Woody Allen they were previously enjoying suddenly turned into John Belushi.

At the conclusion of one of his many reference-heavy jokes Burke sheepishly opined that his act “is not very entertaining but it can be used for college credit.” He’s wrong on both accounts.