North Side - South Side Comedy Divide...

I love Chicago.  I love the vibe here, the attitude, the way people talk, the entrepreneur spirit and even the freaking CTA. It's truly a city of neighborhoods which I eagerly explore. Chicago has always felt like a place of real possibilty and opputuinty, where you really could do whatever you wanted, if you worked hard enough.

Since I'm originally from California even the bitter winters and local corruption seem kind of quaint, sure it's an annoyance but they also have a certain endearing provincial charm. However, that said... There is one consistent, nagging aspect to Chicago which I don't love. Chicago is one segregated fucking city.

I grew up in a working/middle class neighborhood in Berkeley California.  There were White, Black, Asian, Latino and Jewish families all living on the same block in relative harmony. The city of Oakland (where I lived for ten years before moving to Chicago) is going through what could be called a diversity renaissance right now. All the hipster bars, restaurants and clubs have a large and ethnically mixed clientele. It's not uncommon to attend a packed night club with equal numbers of Asian, Black, Latino, and White patrons getting their groove on, in fact that's pretty much the norm. So it was a little difficult to grasp the enormity of segregation in here.

Unfortunately this segregation's finds it's way into the comedy scene with most White comics working rooms on the north-side and most Black and Latino comics working rooms on the south and west-side. Sure there are exceptions to this, but you can count them on one hand.  I've been to every major showcase on the north-side at least half a dozen times and the number of comics of color that get stage time can be described as measly at best.  But that's starting to change.

Last week a Chicago comic named Meechie Hall, a south-side veteran with over ten years in the comedy game, posted the following on Facebook's "Chicago Comedy Scene" group which is a popular forum for local comics to post about gigs, showcases and/or just gripe about shit.

"Dear Chicago Comedy scene. Just because I am a urban based comedian doesn't mean my comedy cant be understood by mainstream America. I have been doing comedy in Chicago for over 10 years plus. The Divide between south and north must stop! It has been a battle getting on mics up north, getting any bookings and even showcasing. The funny thing is that a lot of success has come out of the Chicago urban market. Deon Cole, Deray Davis, B Cole, Leon Rogers, Lil Rel and many more in my 10 years plus. I personally know that the mics up north haven't been giving real urban comedians a chance. I only ask we that we build bridges and not gates.  Don't assume we all are just hacks!!!"

Suffice to say this post stirred up a lot of discussions (which is a good thing) on the forum, garnering over 200 comments from local comedians.  Here is a small sample of some of the better posts.

Marcos Lupara: "How can you say the north side has ignored the south? Have you not seen all of the south side comics mentioned in that list of everyone's favorite comics? Meechie, if you ever want to do Rockford, I can't offer you much pay, but you are more than welcome to do any spot you want."

Bryan Christopher: "Almost every career path is dependent on networking. And networking should never be limited to one area. If you have that narrow of a scope in this scene, You could be the next Richard Pryor, CK, or Chappelle and never end up performing outside of the open mic/free showcase circuit."

Mat Elfring: "Fuck this divide shit. I'll book anyone, as long as you're not an asshole. It would also help if you were funny too. But I hear from a few comedians here and there that many Chicago comedians consider people in the suburbs "hacks" and "unfunny." I guess I was only funny when I lived in Chicago then? (I'm pretty sure I sucked a lot more when I lived there) I want to perform well and run a good room. I don't give a shit where you're from. I'll book you.... again, unless you're an asshole. I don't like dealing with assholes or pompous twits who think comedy is a competition."

Demarco L Monroe: "I perform all over the city whenever I want. Haven't had a problem with any spot welcoming me and enjoying my comedy. I know there are certain styles of comedy. But I swear I try not to see color, urban, mainstream, etc. I just try to make people laugh. I can only be myself and deliver that to an audience. I really don't think sides of a city or comedian demographic has anything to with it. I just feel like if you're funny...YOU'RE FUNNY. Color, class, gender, geographic setting, or whatever won't matter. And if one group doesn't like your style or jokes...move on. This is a challenge for us all. But I remain ME. I couldn't care less about some presumed DIVIDING LINE. I'm a student of comedy. I go anywhere and I'll watch anyone. Peace." 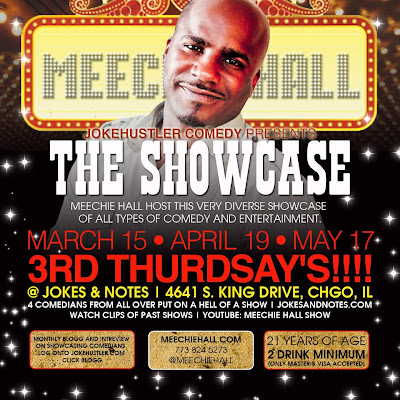 I gave Meechie Hall a call to get his take on things. Turns out that after posting that comment, Meechie has gotten more bookings on the north-side (not sure if the two are related ) including showcases at the Laugh Factory which is the brand new million dollar venue which has finally opened up at 3175 N. Broadway.  Hall is also starting his own monthly showcase on March 15th at Jokes And Notes.  Jokes And Notes in case you DON'T know is Chicago's premier urban comedy club and Meechie Hall will be actively booking a diverse lineup.  "I decided to put my money where my mouth is and give north-side Comics a chance to feature  at a great south-side room".  Hall posted as much on his Facebook page so any north-side comics who are interested should make sure to contact him about getting a spot. Conversely if your a producer looking to diversify then BOOK this man.

The bottom line is if your a comic on the north OR south side and you want to expand your bookings you have to NETWORK.  I guarantee you there are showcases out there that you don't know about.  Talk to comics from all sides and find out what's going on (check out our showcase listings). Most producers are also comedians so start trading bookings.  If your a producer go to other producers showcases and scout some talent out. MIX it up people.