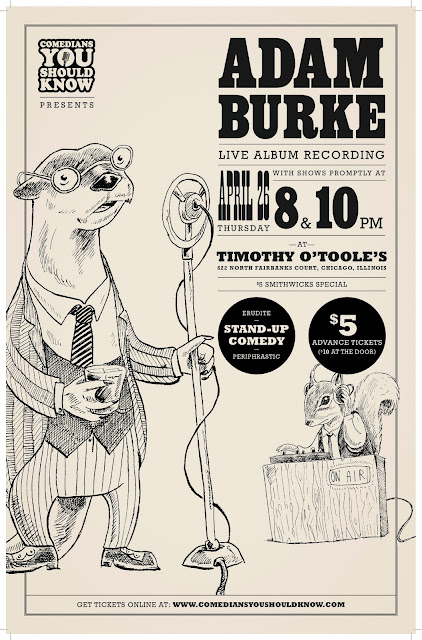 So it's that time of the week where I go "Holy shit balls there sure is a whole lot of awesome comedy going on". I know my tag lines for this segment might seem repetitive/forced/dumb. But I am trying to avoid the usual cliches of "it's going to be of the hook" or "lets raise the roof" or some such tired refrain. But the fact of the matter is the scene is hot and the talent thick, kind of like Megan Gailey, (or Bill Cruz - whatever floats your boat) so we, as your Internet guide to the Chicago comedy scene, have a duty to report the happenings. Speaking of which, the first show I want to plug before anything is Adam Burke's Live Album Recording on April 26th @ Timothy O'Tooles, a GREAT venue, a fantastic comic and a stupid low price of $5. Get your tickets now cause that shit will sell out for shizzle (sigh...) Check out everything else that is going on.


NEVER BEEN TO PARIS AT THE COMEDY BAR
Thursday at 8:00pm - Sean Flannery's one man show is a hot ticket.

Comics and Villains
Thursday at 8:00pm - Go support some of the best local Chicago comics... tonight!


Johnny Theatre
Thursday-Saturdays at 8:00pm, Runs through May 12th - "A hilarious send-up of the theatrical process and the aura effect of hometown celebrities. A nod to playwright Kirk Pynchon's experience in LA, Johnny Theatre demonstrates what happens when a celebrity attempts to inject some Hollywood into a small company on the verge of obscurity and financial collapse." Part of the Chemically Imbalanced Comedy group. Funny gal Ali Clayton is part of this, looks promising...

The Affirmative Action Show Thursday at 9:00pm - The Othello of Chicago Comedy Brian Babylon in the suburbs performing on white woman.. whats not to like?

The Lincoln Lodge Presents: Ricky Gonzalez
Friday at 8:00pm - Ricky has been on fire lately.

Edge Comedy's April Showcase
Saturday at 9:00pm - Brand that started it all...

STAND UP Stand Up
Thursday, April 19, 2012 at 8:00pm - Producer/comic Kenneth Carl Witzgall is a "salt of the earth" type dude.  This show looks to be very solid. "Inaugural Show! Featuring Jeff Hansen with Todd Massey and Keith Paesel and our headliner, Joe Kilgallon, hosted by Ken Witzgall
8pm, $5 at door"