Holy smoke what a busy week.  Adam Burke killed Thursday night for his Live Album Recording and The Wind Up Boys destroyed at the Chicago Laugh Factory for the opening night show.

Went to 4 comedy shows in 4 days and have a shit ton of new pics that will be uploaded to our Faccebook fan page soon. (THEY ARE UP)

Meanwhile here's whats popping in the Chicago comedy scene, check out as much as you can...

YOU THINK EVERYTHING IS A JOKE COMEDY SHOW
Saturday at 6:30pm
Jeanie Doogan is in this so that's enough for me... 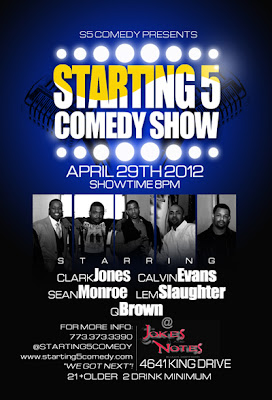 The Starting 5 Comedy Show @ Jokes and Notes
Sunday at 8:00pm
HOT TICKET!, this should be off the hook...

Cameron Esposito & Adam Burke
@ the famous Zanies Comedy Club - Chicago
Monday, Apr 30, 2012 8:30 PM CDT (7:30 PM Doors)
Dude had I know about this earlier I would have been plugging this all week... Two of the best comedians in chicago TOGETHER, at one of the oldest, most respected clubs in the city of Chicago.  A HOT TICKET!

Awkward Moments LIVE at The Hungry Brain
Monday April 30th
Collin asked me to help plug this show, he's a bit of controversial figure, but he works hard and the line up is good so bam!  Check out the press release.
Awkward Moments with Collin A. Bullock is easily one of the top 30 comedy podcasts on the Northside Chicago comedy scene. Every week stand up comedian Collin A. Bullock (self described as "A Charlie Rose for people who jerk off a lot") interviews someone of interest and they discuss comedy, tragedy, life, death, religion, sex, farts, and more.
This Weeks Guests include:
Joe Kwaczala
Liza Treyger
Erotic Novelist Philip Milip
MORE TBA 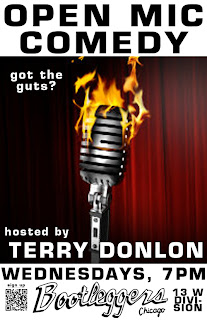 The Lincoln Lodge
RECOMMENDED! A not to be missed showcase.  Every Friday