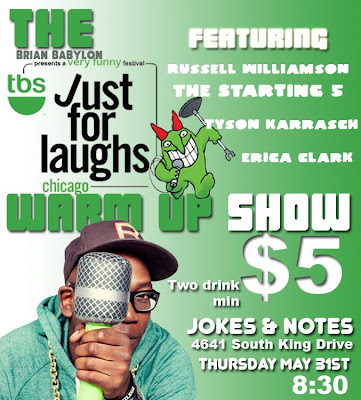 Yo!  So the JFL festival is coming to town with tons of famous comedians and the whole thing should be quite off the hinges (or whatever the hell kids are saying now a days).  We summarized what the stand out shows should be last week, but if you ain't hip to what JFL is all about check out their website.  The insanity starts in two weeks but until that happens there is plenty going on to satisfy  your comedy needs. Here whats going down this week, get in as much as you can before the festival starts and prices go up.

Comedians You Should Know
Tonight and Every Wednesday... Still one of the best stand up showcases in the city, consistent booking and attention to detail make it a must see for any true Chicago comedy fans.

NEVER BEEN TO PARIS at THE COMEDY BAR
Sean Flannery's one man show is still going strong, catch it while you can.  Thursday night!

The Brian Babylon Warm Up Show@ Jokes and Notes
Babylon does it again with an all pro line up of Chicago comics that will be featured throughout the JFL Festival. Tomorrow night!

Stand Up Stand Up Week 7 with Junior Stopka

Go watch Junior Stopka explain to a bar full of hipsters why they should all die... Solid lineup at a up and coming showcase, enough said just go. Thursday at 8:00pm
Joe Kilgallon headlines Laugh and a Half
Epic rantings by our favorite ginger... good line up too. Featuring Will Miles, Bryan Bowden, and Martin Morrow! Hosted by Tony Valle

The Lincoln Lodge presents Chelsea Peretti (SEASON FINALE!)
Been meaning to go to The Lincoln Lodge?  Well this is your last chance before they go on hiatus. A great way to end a great season. A Friday show has been added. Not to much to say other then buy your tickets!

OK! Looks like Mondays night are about to get crowded, as we have two new rooms opening up on June 4th.  Both of them are hosted by talented young woman AND they are relatively close to each other for those of you who like to open mic bar hop....

WOWMS presents THE ROCKY HORROR PICTURE...
OK... I know this is not exactly standup but the RHP experience is a must at least once in your life, plus it's  fucking hilarious... all virgins must go: June 8th

10 for 10 at Zanies
Look at Zanies trying to be all hip and shit by booking local rising stars, a GREAT line up, June 13th

The Funny Story Show: JUNE EDITION
6 comics tell funny stories, NICE line up, plus anything Ever Mainard does is good with me right now... June 15th