ERIC ANDRE: From the Hideout to Adult Swim and Beyond: By Prateek Srivastava 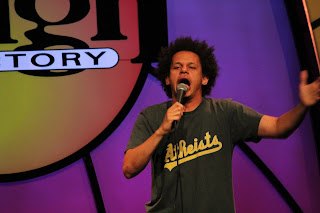 Eric Andre caught my eye last year while I was watching Comedy Central. His wild afro and bugged out eyes defined his persona and fit in well with his high energy absurdist comedy. Don’t let the crazy hair fool you, the guy’s hardly a slacker and has been working like crazy to break into the world of television. Currently he’s added talk show host to his resume with his new Adult Swim show. The aptly titled “Eric Andre Show” is a talk show, filmed “cable access” style but ultimately it morphs into a playhouse with no boundaries. On TV Eric is joined by the very laid back Hannibal Buress. Buress(a Chicago native originally) dabbled in TV writing stints at 30 Rock and SNL; he plays the sidekick on the show. The back and forth between the manic Eric and the chill Hannibal is the key to the show’s success! I have to say that sometimes it’s hard to understand why you’re laughing. The clip below begins with Eric’s usual intro involving destruction of his set but it devolves into him singing an R and B-esque number about bananas and Obama. I never thought I would see Hannibal Buress happily crooning in a matching white outfit.


The Hideout show itself was part of his live tour of the Adult Swim show. Kudos to JFL Chicago for recognizing Eric’s talent and providing a great venue! The Hideout housed some great shows during JFL Chicago including the previously mentioned REDACTED featuring a who’s who of talent. Getting back to the Eric Andre show, the sold out crowd packed into the intimate space! No chairs were provided and that would prove to wise choice after all. Things kicked off with Hannibal Buress! The rowdy rock club type crowd was a loud at first but like a pro Hannibal was able to reel them in with some bits about taking a shit on an airplane and scrambled eggs. He quickly introduced the opening act, Chicago’s own Junior Stopka. I’m always happy to see Junior perform anywhere whether it’s at a local show like CYSK or at 1 in the morning at an open mic like Coles. The Hideout’s crowd shared my opinion and rolled with Junior’s punchlines going along for the ride. I’ve mentioned this before but it’s great to see JFL recognizing local talent like Stopka and give them the chance to perform alongside the headliners.
Things went into hyper-drive by the time Eric Andre came out! Much like the opening of the show on TV, Eric dismantled the entire stage! Diving back and forth, knocking over both of his desks, and even tossing potted plants into the audience, it was a melee. But a fun melee, Eric made sure to run through the crowd a couple times literally biting a dude’s leg for no reason. That’s a recurring theme of the show, things happening for no reason but you roll with it. There were some slight technical difficulties audio miscues, etc. But the audience kept the energy going and like Hannibal said “y’all probably thought these glitches were some high minded adult swim shit” no there were technical difficulties. The show itself went from a random monologue to Eric Andre pulling random audience members on the stage. Loads of short films were presented to the crowd. one my favorites involved Eric and a few other guys dressed up in slave garb and running through a Civil War re-enactment!

Many TV shows are going on tour now, Portlandia, Tim and Eric, etc. and it’s oftentimes an interesting experiment. The Hideout’s indie rock club was the perfect fit for the no-boundaries show. Overall, the show full of hilarious insanity, between Eric tossing a red bat into the audience, Musical cues going haywire and a “Gangsta Rap Act” that ended bananas being tossed onto the stage. Also, check out this clip taken from the Live show at the Hideout.


Another thing to take away from Eric Andre is that he’s a big stand up workhouse he was hitting up shows all week including opening up for Amy Schumer dropping by at Lincoln Lodge, Up Comedy Club and even the Laugh Factory. While he’s not from Chicago originally, he’s supportive of the local scene, in the past he’s dropped by shows CYSK, Entertaining Julia. During JFL he dropped by the very fun Wind Up Chicago as well even doing a set during the open mic at Coles Bar.

Check out the Eric Andre show on Adult Swim and don’t be bummed that you missed out on the Live Eric Andre Show. On July 15th, Eric Andre will be performing the Eric Andre Show at Bottom Lounge as part of the Pitchfork music Festival After Party!
Contributing Writer
Prateek Srivastava
Newer Post Older Post Home