Thinking out Loud; Comic or Comedian: By Jeremy Solomon

When you're on a long hiatus from performing comedy (as I am), you might start writing and performing songs as your girlfriend's cat. Another thing you might do is try to understand the breakdown of terminologies in comedy. One such breakdown is 'comic' versus 'comedian.' Though no whiz at grammar myself, certain bastardizations of the language frustrate me. It makes me a bad texter, and also a bit of bad human being. For the latter this stems from my getting a touch holier-than-thou when words are used incorrectly. To add poop to the pile, I make plenty of these errors myself. 4 ur sake (really mine, but also yours) I will not type like dis if avoidable.

At least I can be glad that, in typing the word 'texter,' I found it is not in blogger's dictionary. It really shouldn't be. Granted, words are all defined by other words, and usage is arbitrary and based on common acceptance, but dammit I cling to the past. Lucky for us all, I haven't done the breadth of research to launch into what level of common use allows a word to make its way into the dictionary. You can google that on the Internet if you like.

What this bit of nonsense brings me to is the breakdown of the terms 'comic' and 'comedian.' Comic began as an adjective, to describe a humorous scene or concept. Something could also be comical. Comedian on the other hand meant one involved with performing comedy, making jokes (though sometimes not creating them as many of us know) and, with any luck, eliciting laughter from an audience. But now comic has been nouned, which isn't a word either, but might as well be since people just switch parts of speech willy nilly these days (and they hardly say willy nilly). Thus fail being used over failure. "That's a fail." Saying that, is a failure.

Other comics—or should I say comedians—have made their feelings known to me about what it means to be a comic. And it sure as shit isn't just saying you are a comic. When I said other comics, that is branding myself a comic, and while I've done my share of performance, I still don't put that label in front of my name. What this stemmed from was my friend asking what the difference is between a comic and a comedian, his point of reference being Louie, where Louis C. K. refers to himself as a comic.

Now hell, the dictionary does make them out to be synonymous, but the Mac dictionary widget makes the distinction that a comic is a comedian, esp. a professional one. But really, according to who? 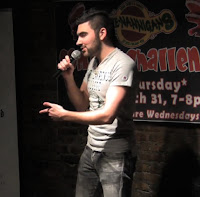 So if you are a slinger of jokes (the loose terminology I am using in effort to say neither comic nor comedian), one that truly devotes their life to the craft enough to say that they could be one of these c-words and not inspire the ire of those out there working their respective genitalia off, why comic or why comedian? Has comedian become too bougie (not this bougie) for those down-to-earth, truth-saying, every[wo]man comics? Would you say you're a comedian in LA and a comic in Chicago?

The answer is that you probably don't care and think the dictionary settled it. But shouldn't we question the answers? Either way, ending blog posts with questions is annoying, and seems like you are fishing for comments. Nothing comic about it.