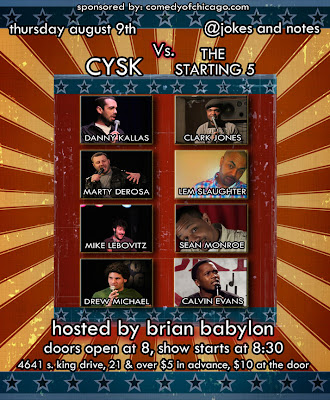 Wow...  So many positive, affirming events have happend in the last couple of days it's crazy. We were invited to be on NPR's Chicago affiliate WBEZ, for a segment on  the Chicago comedy scene, along with Burt Haas of Zanies... an amazing experience and a great opportunity to plug the scene as a whole.  The outpouring of props and kind words from comics and producers was heartwarming.  Bill Cruz even made a video about it.  The next day Patton Oswalt plugged one of our articles written by Tommy McNamara about the Chicago open mic scene and how critical it is to a new comics development...  that was a HUGE plug... got about 10,000 hits of that... then I hung out with Junior Stopka for an in-depth interview before he goes on tour with Doug Stanhope... which basically means we drank and talked shit for six hours straight... (interview will be up soon) then I passed the hell out...

Here's what Popping....
First of all, major props to Clark Jones for putting together an unprecedented line up of talent from ALL sides of the city.  It's called Overtime and features members of Comedians You Should Know and The Starting 5... August 9th at Jokes and Notes...
Charlie Lind's Last Two Hour Comedy Hour

The Starting 5 and Comedians You Should Know Present "Overtime"