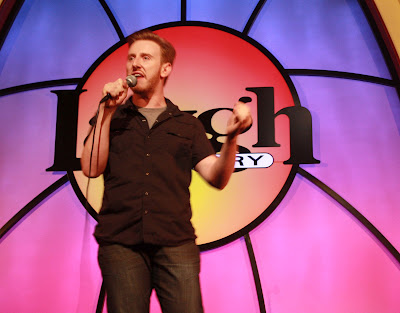 Comedy can only come from truth and honesty.

The fear that kept me from doing stand up derived from a lack of creativity and ideas. I watched a lot of stand up and wondered, "How do they find so many topics to talk about?". What could I possibly contribute? Now, only three months in, I realize that potential material is all around me. My brain is constantly on, trying to translate everyday happenings and thoughts into stand up material. I knew from the beginning I was not going to be writing straightforward jokes; I've never been good at it. I knew that I could deconstruct a thought, flip it on its head and find the humor in it. That's my natural sense of humor. However, never before have I written something with the specific intent of making people laugh.


I needed four minutes of material to do an open mic and I spent two weeks trying to force something out that was ultimately not funny because I was trying too hard. I had to start somewhere. Self-deprecation came easy and I decided to start with that. The first joke was about the fact that I am Jewish but have a Celtic appearance because of my red hair and freckles. Within a week that idea (which I think is funny because I am constantly mistaken for an Irish guy) became a bit more concise. "I’m Jewish. My ancestors survived the Holocaust, I look like I survived the Irish Potato Famine." It got some chuckles, which was enough for me at the time. After two weeks I stopped using that joke and recently decided to bring it back but in a slightly different and arrogant variant. "My ancestors survived the Holocaust. I look like I comfortably sat through the Irish Potato Famine." The response to that has been stronger and the key to the success of that line is in the arrogant delivery.

At first I was trying too hard to be funny and sound like the comedians whose work I admire and respect. It's impossible to make a crowd react with no connection to the material and a lack of personal opinion. I remember my second set at Lottie's Pub. I talked about Facebook trends. It was something I thought would work because hey, its Facebook, people can connect to that. First of all, not an original topic and second of all, it was a list of premises. I quickly learned that an observational joke is not simply pointing out something and giving it a Seinfeldian "what’s the deal with...." tone. I didn't actually say "what’s the deal with Facebook?", but I might as well have.

My first joke with a point of view came to me at the end of the second week. I was at an open mic talking to the host. We had the standard "I'm from Russia" conversation and she told me about a Russian friend she had. This wasn't the first time someone had told me they had a Russian friend after finding out I was Russian. I realized whenever people told me about their Russian friend there wasn't much more to the story. Here's the joke:

"Whenever you are of a different heritage, people always have a story for you. I am Russian and I often hear a story that goes like this: "Lev, when I was in high school there was a guy in my class who was also Russian!" Now what can I do with that information? What you're literally telling me is 'Hey! I also know a person.'"

It took me about a month to get a solid laugh from that joke. It's all in the rhythm of delivery. Since my material is anecdotal, the laughs come from my attitude. A transcript isn't necessarily funny.

I think it's important and completely natural to write pure garbage at first because in doing so you get closer to figuring out what really matters and what is true. Think of it as a water filtration process. At the beginning the water comes out brown and dirty but eventually it turns clean and is safe to drink. It's crucial to be aware of that. Yes, I know I started writing material that meant nothing to me and I wanted to get laughs. That doesn't work. It's impossible to sell something to someone without having knowledge of what the product is. For a comedian, the filtration process is ongoing. Our thoughts and opinions change and develop as we grow as human beings.

I'm at a point where I am starting to question a lot about myself and consciously realize the absurdity of the thoughts that go through my head. I'm talking about everyday realizations and rationalizations. I think we all share the same strange and weird thoughts but are afraid to openly talk about them. The best material is the kind that makes us realize how ridiculous we are as humans and gives us the ability to laugh at ourselves.