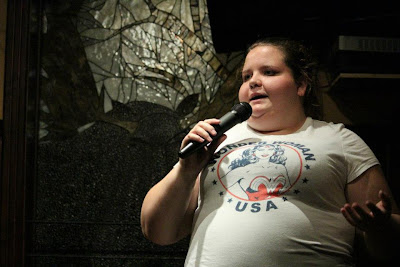 I think fat jokes are for the most part, lame. Since I'm overweight I'm also super sensitive to this subject and do not hold an unbiased view.

That being said, I think making fun of fat people is elementary. Most of the time when I see a comic with a bit about how fat someone was, it's a hack fat joke: "Her rolls were CRAZY HUGE!" It reminds me of grade school taunts that little kids torture each other with and for the most part it's the same dumb, stereotypical material.

However, I do think it is possible to have jokes about overweight people and it be super funny. In my opinion it just has to be a little more intellectual than, "Hey lady, eat a freaking apple... Amiright?" It is a population of people who are constantly made fun of and told to hate their appearance. It is comparable to going to the special Olympics and heckling the mentally disabled. Not that people with weight issues are mentally disabled but no one in their right mine opts to carry an extra 50, 100 or even 200 lbs around day after day. My experience with weight issues could be compared to a drug addict and rivals the same issues as an anorexic. Yes, the cure is simple in theory but mentally it is a hard thing to get past. Yadda yadda yadda I could type for years about weight issues but that's not my goal of writing this.


Nothing boils my blood more than seeing a 5 foot nothing 100 lbs lady making jokes about how, "fatties need to get more self control." If a comedian has never had a weight issue and they are belittling fat people, I automatically tune out. That means that even if they have an amazing set after that, I probably won't hear it because I'm thinking about how I want to take an apple and shove it in their mouth so they will stop talking. 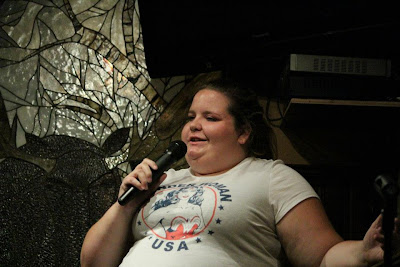 My challenge to comedians and really all human beings is to not berate a group of people that everyone already freely berates. I have a lot of dark/blue humor and say possibly offensive things, but it is usually a topic that I have struggled with and is personal to me. I have no right to tell someone what to write jokes about and would never hold a grudge against a comedian for choosing a topic I didn't agree with. That being said, I do respect comedians more if they choose the higher road, rather than the cheap easy laugh. If someone was very offended with something I said, I would be open to hearing their critic, not that I would have to actually change my material if I didn't want to.

Most of the established comedians I have seen perform do not use fat jokes, unless it is personal to themselves. I wrote this in hopes to reach out to the newer comedians on the scene, like myself, and share my point of view.