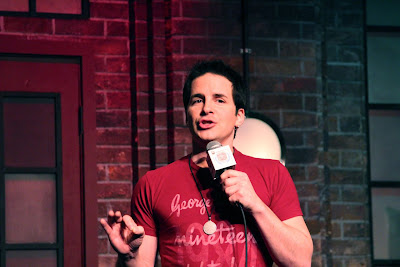 Hal Sparks' resume is ridiculous.  He began stand up at 15, was voted Chicago's funniest teenager at 17 by the Chicago Sun-Times, hosted a TV game show when he was 18, has more TV appearances then you can shake a stick at, hosted E!'s Talk Soup,  co-starred in the ground breaking Queer As Folk, has cameos in several Hollywood blockbusters, and to top it all off he plays in his own freaking rock band.

I must admit though, the first time I saw Hal sparks was on VH1's "I love the 70's" show.  Can't remember exactly what he said other then it was ridiculously funny and a spot on critique of what ever oddball cultural reference they were riffing on at the time. Of all the comedic commentators on the long lived "I love this or that decade" series, Sparks (along with Patrice O'neal) was probably my favorite.  His biting commentary, while a touch sardonic always had loud ring of truth to it.

Unfortunately, I did not see Hal Sparks perform live until years after the VH1 series. I just happened to catch him at the UP Comedy Club for the Midwest semi final bracket of Rooftop Comedy's National College Comedy Competition, where I was asked to be a judge. Sparks was the special guest who the organizers had kept tight lipped about right up until show time. Sparks wasted no time with bullshit niceties and spoke directly to the young college student hopefuls. "Fuck the judges, trust your instincts!" I laughed out loud on that, snuck a look at the other judges who were all stone faced and immediately thought to myself "think I'm going to enjoy this". Sparks went on to perform an amazing set with what seemed to be straight up improvised bits.

We chatted on the phone about his upcoming Chicago show at the Mayne stage Sept 6-8th, and the conversation was a lot like his performances, all over the place and hilarious.  Sparks basically talked shop about the art of comedy for  over 45 minutes.  I won't pretend it was a straight interview, here are the few quotes on topics I was able to scribble down in between laughing my ass off.

On performing in Chicago:
"I love to perform here because Chicago lets you be original. There's a certain type of material expected of you when you perform in L.A. or New York that you just don't have to worry about here. You can push the envelope to more creative material and a Chicago crowd will be willing to work with you."

On his uncanny ability to appear like he's constantly improvising.
"I've got 3 hours of material I can pull out at anytime and go in whatever direction I want. Plus I know how to bullshit so I can work out my material on stage if I want to. But the bottom line is, my job is to be funny, so I need to have whatever tools ready at my disposal to do that."

On rape jokes.
"You cant go from zero to  Lenny Bruce in 5 seconds. The audience has to trust you, and that takes work.  If the audience trusts me, then I can try something, and I know they trust me because I've done the work leading up to it.  You just can't get around not doing the work."

Again, not really an interview but more of an opportunity for me to laugh/chat on the phone with a comedic genius for almost an hour. But in all seriousness it's a real treat to have Sparks in Chicago doing his thing at the Mayne stage.  Get your tickets while you can.