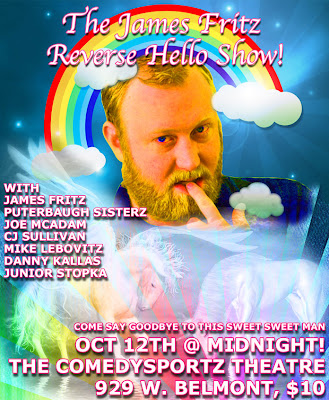 Holy "expletive" balls, it's crazy how many pictures we've taken in the last three weeks or so (2000+). The dual curse/blessing of running this blog is that on a daily basis is that there is consistently a shit ton of comedy options happening in the Chicago comedy scene and we cant always cover all of it.  The "What's Popping" updates, which are  primarily created  to plug and promote all of the local upcoming shows and events, have been well received but are clearly not robust enough. So... we're gonna start a new segment called "Weekly Top 5", which will essentially be for covering recent events and is basically meant to be a summary of all things comedy that we've been lucky enough to attend.

But first, before we get too deep into that, we've got some big news to announce: Comedy Of Chicago is producing it's FIRST showcase!  "The James Fritz Reverse Hello Show".  Yep James Fritz is leaving town and we're gonna party down in a big way. I met James Fritz way back during the Lakeshore Theater days; the man has always been a central figure in the scene, a big supporter of what I've been trying to do and an all around sweet guy. Not to mention he's probably my favorite comic hands down. Fritz has undeniably shaped Chicago comedy in the last 7 years and will be missed terribly, this show may be the last chance for many of us to see him off. Again this is a COC produced MIDNIGHT show so you know the shit might get illegal, plus there will be plenty of giveaways and special surprises. The line up is sick and the venue plush and all profits go to Fritz's broke ass, (plus the other comics) so come out and support, but get your tickets soon cause seats are going fast.

On we go. Like I said it's been one hell of a whirlwind couple of weeks or so. In the last month I've personally met, George Wallace and Tom Dreesen at the Laugh Factory (which despite some poor yelp reviews is slowly hitting a stride with some good shows coming up), Hal Sparks at the Mayne Stage (a fantastic show that we were lucky enough to watch from the second row) and Tommy Davidson at the always fab UP Comedy Club (if you call yourself a comic and don't recognize at least one of those names... quit now, if your a comedy fan and you don't... you might wanna spend some time on google).

The Tommy Davidson show was probably my favorite. Davidson can do impressions like no one else, his Obama impressions were spot on, hyper detailed and hilarious as hell. Davidson was also super approachable, personable and cool enough to chat with folks and pose for pics after the show.

Most recently I went to the Comedy Central Audition, which was an absolutely raucous high energy show with a packed house at the Comedy Bar in river north. I also made sure to hit up at least half a dozen open mics and local showcases.

That said, all of those shows I attend account for probably less then 10% of what's going on in any given week here in the city. That's why I stand by a statement given to the Chicago tribune a few months ago that "the scene is on fire". And here's why I feel that way: In the last 4 months Ive been to all the "major" venues in town that feature  "big name" headliners as well as the dozens of the successful smaller rooms that keep it rocking with local talent.  And guess what? All of them are doing well (talking about specific rooms people). Sure some have an off night here and there but for the most part the ship is afloat and speeding ahead. Bottom line is there is a steady, real, demand out there for quality comedy.  Chicagoans are in general a self deprecating breed and tend to forget that this is the third largest city in the country at almost 3 million, with a surrounding total county population of over 5 million... There is no bottom to this market people (at least in the foreseeable future). Folks need something to laugh about in this shitty economy, and affordable quality entertainment is something Chicago has in good supply.

Sure there are some detractors out there who complain that too many showcases dilute the overall quality of the scene and that one bad comic can ruin a showcases reputation... Sorry, but I have to call bullshit on that, if one bad comic can fuck your showcase then it sucked anyway... And Don't worry about what some other crew is producing down the street. Worry about what YOUR doing and. YOUR creating. If your showcase promotes well and treats the audience as professionals with some integrity... Your market will grow. Keep your shit tight, your attitude positive, your overhead low and just focus on producing the finest quality product possible with the best comics available to you... And we will plug the hell out of it.