Shut Up and Say It: By Krystal LaFianza-Pitzen 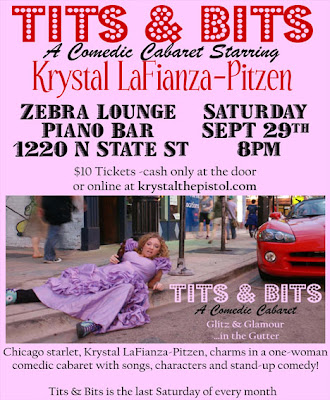 I’ve been trying to write an entry for this site for months. I’ve been slowly chipping away at the concept of ‘What’s in your comedy tool belt? Improv? Sketch? Solo-sketch? Music? Stand-up?’ In my fragmented article I explain each art form with witty quotes supporting my definitions then further my explanations with how each comedy tool has helped me. A fine concept but the blog entry feels like an overcooked stew, the fresh veggies have become grey mush.

I didn’t care about what I was writing and I knew in the back of my mind that any stand-up comedian reading it wouldn’t care either. After all, if a comic wants to get acquainted with improv they can easily drop some cash on classes and find themselves on the popular improv team, "Never Get Off The Circle Jerk".

So I mumbled to myself “Shut the fuck up and say it.” My reply, “Say what?” Right back at me, “Anything. Anything you want to talk about.” So here we are amidst a blog entry with little direction but I’m really enjoying writing it and I promise there is a point just stay with us. Err, me.

The point is write, perform, say whatever the fuck you want, whatever feels good and stand by it. This is a something I’ve been largely keeping in mind while generating new stand-up material. My background is in theater and sketch comedy which both require plot, characters, dialogue, resolution, etc. …if you want to bog yourself down during 5 minutes of stage time, keep all that shit in mind. 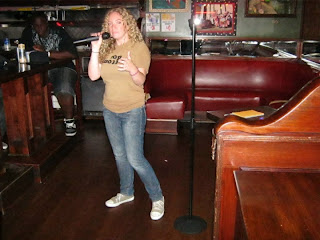 So lately I’ve been practicing the art of winging it by simply being in the moment while feeling out a joke and audiences have responded favorably. I should note that I still choose words my words wisely; I’m not trying out that new gang bang joke without some thought and like any good date the audience appreciates being romanced over a blatant muscle fuck.


Something that assisted me with this ‘shut up and say it’ breakthrough was a run in with one of Chicago’s most loved homegrown comics, Sean Flannery. I had the chance to bend his ear after the show, Blackout Diaries, and boldly asked him “What is stand-up comedy? Is it one liners? Is it storytelling? Is it set up, premise, act out (as described in The Comedy Bible)?” He plainly said, “It is someone standing on a stage, alone, with a microphone entertaining a room full of people. That’s it.”
Well, that’s it! Don’t overthink. Love your comedy. I’m late for improv class. Peace out.