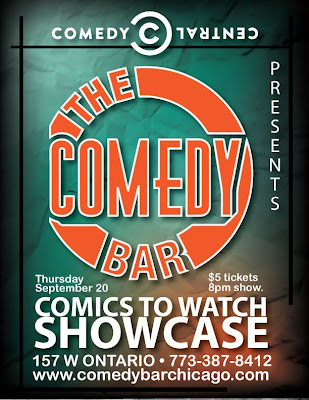 Hot damn!  There are a bunch of hot comedy showcases popping off all over the city of Chicago this week. Now that the weather is nice and mild It's a perfect time to get out and support some great local shows and talent

Two of the bright standouts are happening (Monday 9/17) tonight! At the  Ace bar you got: The Comedy Evening Presents: Drew Frees and the Case of The Purloined Giggles. This outside the box weekly showcase has been doing big things lately and has another solid ass lineup tonight.  Hosted by the fearless Marty DeRosa and headlined by the ridiculous (and damn funny) Drew Frees. The other hot pick for tonight is the monthly Shine Box Presents TBD Comedy at The Owl. If your in the Logan square neck of the woods this is your best bet.

The second standout comedy event this week is going to be fucking bananas, no joke.  Make sure you peep the  COMEDY CENTRAL AUDITION SHOW at the comedy bar.  This line up is SICK and a real who's who list of local comedy stars.  Tickets are free with the online code CCFREE.... WHAT!?  I don't think you heard me, tickets are FREE.  That's a great freaking deal for all you broke hipsters out there, but better hop to it right now cause that shit will sell out for sure.

OK...enough chit chat, here is what's popping for the next two weeks, all of it good.


The Comedy Evening Presents: Drew Frees and the Case of The Purloined Giggles
@The Ace Bar
Tonight, Sept 17th
One of the best new showcases in town.  Hosted by Marty DeRosa and headlined by Drew Frees.

Feztival
@ Dank Haus
9/22, A fundraising event to support the Feminine Comique and the Lincoln Lodge.
A GOOD CAUSE!