OK, so sometimes we get a tad stumped trying to articulate clever and/or funny ways to reiterate the same thing over and over again.  Not that the basis of what we're promoting, about the many awesome comedy happenings all over the city, aren't true... it's just that I run out of snappy one liners and clever ways to say "holy shit you should really run out and catch some amazing and affordable comedy shows this week"  Oh wait, I think I just did... Anyway there truly are some great comedy options happening in Chicago this weekend and beyond,  "The Shit Show", "Pete Holmes" and "Creative Control" being the stand outs... but all events listed below are recommended. Check it out and go support local comedy gosh darn it.

STAND UP STAND UP PRESENTS: LEM SLAUGHTER
Stand Up Stand Up
This showcase has been gaining mometem all summer long... FREE Pizza and a FREE show with consistent strong headliners... it's a no brainer....
Tonight 9/27

"Giving Back" to Sam Thompson Foundation
ComedySportz Chicago
A great Cause.
Tonight 9/27

1 Year Anniversary Of Edge Open Mic At Sullys House
Sully's House
The edge as a brand has been doing it longer then anyone, a year ago they moved operations to Sully's House (Which is a bar, not some dude's crib) and is now one of the better open mics in chicago...
Tonight 9/27

Tits & Bits: A Comedic Cabaret
Zebra Lounge
I'll be there.

Gorilla Tango Burlesque Audition Notice
OK so this is not a comedy show, but GTT asked us to plug the audition... so here u go.
"Gorilla Tango Theatre is auditioning female performers to join the cast of "A Nude Hope: A Star Wars Burlesque". Saturday, Sept 29, 10am-Noon (callbacks to follow from 1-2pm)
Gorilla Tango Theatre, 1919 N. Milwaukee Ave.
9/29

The Shrine
Ok... so this is not a comedy evet per se.. but if you can appreciate shaking your ass to some authentic Chicago house then it's recomended.
10/03 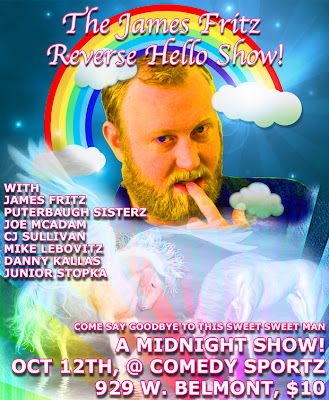 Adam Burke CD Release Party!
Cole's Bar
Help Adam celebrate the release of "Universal Squirrel Theory", which will be coming out on A Special Thing Records in October

Recommended!
Mike Lebovitz is a real treat and this is a fun ass venue.