An Inner Conflict: by Lev Kalmens 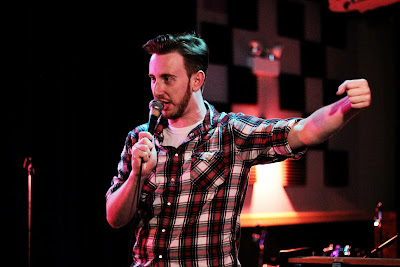 A comedian has to know and acknowledge that he or she is funny. It might seem egocentric but it's absolutely necessary. If I didn't think I was funny, I wouldn't try to convince others. For me, it's always been easy finding the humor in everyday situations and making people laugh. However, performing stand up comedy is an entirely different beast. As a new comedian, I notice a disconnect between what I’m doing on stage and my own, personal sense of humor. I think the problem stems from the pressure of feeling the need to be funny on stage and not trusting my own instincts.

The type of material I want to perform on stage doesn't match my natural sense of humor. It feels like I'm forcing something that isn't fully me. It's like I'm trying to reinvent my sense of humor and style. Why I wonder? It's unnecessary. It's like fighting gravity. I'm working unnecessarily hard by writing material in order to fit a mold of comedy I enjoy as opposed to the comedy that I am capable of doing. Its impossible to be successful when you're not being honest. Now, that's not to say that the material I've been writing hasn't been truthful. No, It's my approach that hasn't been truthful. As I wrote before, I'm drawn towards comedy that is more personal. I'm interested in talking about my shortcomings and my awkwardness. That's completely do-able and possible; I just think my approach has been wrong. I have an absurd sense of humor. It comes easy to me. I've been completely ignoring the absurd element of my personality on stage. I've been stifling it and attempting to be more realistic. Ignoring my comedic strengths has made my comedy forced and therefore not funny.

I recently watched John Mulaney's Comedy Central special "New In Town" and really enjoyed it. Particularly for his style and how graceful he is in his performance. Mulaney talks about why he is the way he is. He tells stories from his childhood and adult life, all while mocking himself. It's his persona and delivery that makes him successful and very funny. If you haven't seen this special, I recommend it. I'm a fan of self-deprecating humor and I wanted to write some material in this particular style. I don't think I was very successful at it because I was trying to copy a style I enjoyed, yet, stylistically, it wasn't natural for me. The result lacked depth and conviction. I was trying too hard.

When writing, I try hard to come up with funny bits and then have trouble memorizing the "jokes" because they're not completely honest. I'm too concerned with being funny rather than saying what I think and trusting my own opinions. I realized I have to trust my instincts and not worry so much about what people might think. Instead of writing a bit out in advance and then performing it word for word, I will try improvising and riffing about a certain subject and develop material in a more organic way. I think, eventually my own, unique comedic voice will start to take form. I think improvisation will keep me more in the moment and focused on what I'm saying as opposed to trying to remember the words I wrote down. I think comedy is mostly about the attitude. An audience responds to emotion more than the words.

There is no need to adhere to a specific style. It’s important to trust your sense of humor and let that be the guide. If you're funny, honest and in the moment it will translate. That is really all that matters. The audience couldn't care less about the process. If it's funny, it's funny.