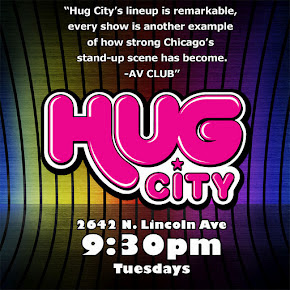 One of the best kept comedy secrets in Chicago is Hug City Productions. It's one of the first showcases I ever checked out. Used to be in the seedy, serial killer-ish, basement of the Elbo Room (decent bar but lame for comedy), but it's at the much better suited (newer, roomier) Racine Plumbing Bar & Grill and has been for a while now. Despite venue changes, switching nights and random cancellations due to sporting events Ryan Durdin has kept this showcase going strong and it's been chugging along now for close to three years.

The secret to Hug City's success (OK 3 years might not seem like shit, but trust me in the showcase game that ain't too shabby) really comes down to Durdin himself.  The man knows how to book a showcase.  Time after time Durdin gets the best comics in Chicago (and around the nation frankly) to perform at his back room bar show.  And what's really exceptional is the damn thing is FREE.  Yep no cover charge, no drink minimum, just great comics banging away for appreciative fans. This tuesday is no exception, plus it's Ryan Durdin's Birthday and the line up is extra bananas.  So... read the PR blurb, check out the lineup and get your butts out to this highly recomend showcase. Tuesday 10/23 9:30 PM.


Hey ya old devils! Tuesday October 23rd is my birthday, so what better way to celebrate it than to do what we always do, except way drunker! As always we'll be bringing you Chicago's funniest stand up comedians for FREE and my pants will probably be spinning from the ceiling fan.