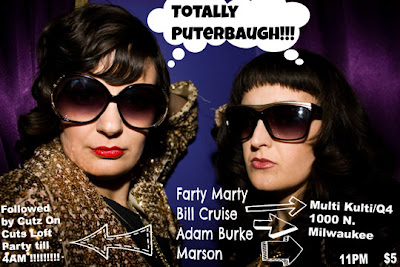 A ridiculous Chicago comedy showcase followed by a loft dance party that goes on till 4AM!?  I'm down with that. I know we plugged this upcoming showcase in our "What's Popping" segment on Tuesday but since this show is looking like it's gonna be extra  bananas we thought it deserved some more plugging (thats what she/he said). This Saturday, 11PM @ MultiKulti,  the Puterbaugh Sisterz are gonna blow some minds with a powerhouse lineup of

Not familiar with the Sisterz?  Then let me do you a favor and hip you to the them cause they got exactly what you need my friend.  Check the out bio snippet from their face-book page

Actual Sisters, Tiffany and Danielle Puterbaugh will revolutionize. They are bringing comedy duo's back, or at least to the back of every dive bar.

"Taking their schtick into absurdest parallel universes...it works 100% of the time. Making them one of the most innovative and up and coming acts to catch in town,” says The Onion AV Club.

“Its refreshing to see a duo where neither is the straight (wo)man,” says Comedy of Chicago.

They have performed in The Andy Kaufman Awards and recently in TBS Just For Laughs Festival Chicago. They also performed in their own festival, Just for Rafts. They are cast members of Chicago Underground Comedy and produce a critically acclaimed comedy/variety show, “Entertaining Julia.”

If your looking for some Saturday late night laughing and booty shaking, this is the ticket.