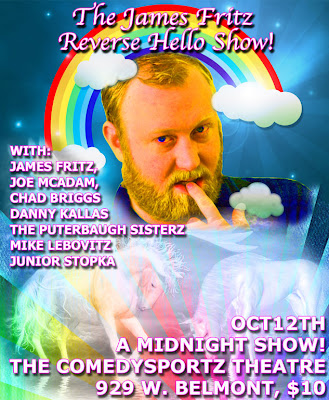 OK this is it, the big week is here. If you didn't know, Comedy Of Chicago is producing an insane showcase this week! "The James Fritz Reverse Hello Show" is rapidly approaching this Friday October 12th (a MIDNIGHT show!!). Yep James Fritz is leaving town and the plan is too party like it's 1999... um, again. I've known Fritz a while now, we met way back during the Lakeshore Theater days and he's been a central figure in the scene because of his undeniable talent and insane work ethic. Not to mention he's an all around sweet guy. Fritz has helped shape Chicago comedy for the last 7 years and will be missed. This show may be the last chance for many of us to see him off.

Again, this is a COC produced MIDNIGHT show, so there will be plenty of giveaways and special surprises. The line up is SICK, all hand picked by Fritz, and profits go to Fritz's broke ass, (plus the other comics) so come out and support. Also Fritz and I will be on Vocalo Radio Friday morning to promote the show so please tune in.  Meanwhile check out "What's Popping" because as usual there's a whole lot of shenanigans going on this week and beyond.

The Comedy Evening Presents: Drew Michael and the Quest for Truth
The Ace Bar
Tonight! 10/08
Quality showcase with dance party after.

RELAUNCH WEEKEND with Jim Belushi!
The Comedy Bar- Chicago in Chicago, Illinois
Yep!  Just as off the hook as it sounds.