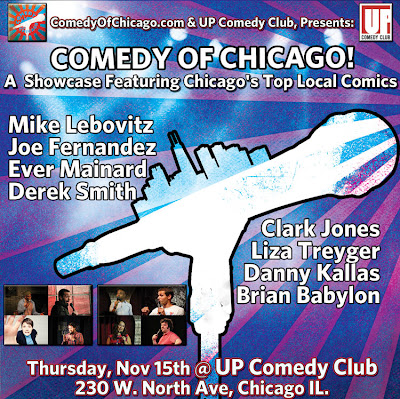 YO! Nov 15h is our debut showcase at the UP Comedy Club and even though it's less then two weeks away we wanted to make sure we put it on peoples radar. Do not miss this show you guys. If you enjoy and follow this blog, if you dig what Comedy Of Chicago is trying to do, if you were ever hooked up with free tickets or publicity for your own event, then please... come out and support.


It's not always easy to find the perfect venue to produce a great comedy show, which is why it's such a pleasure to have the opportunity to do so at the excellent Up Comedy Club which is probably the best venue in the city to watch quality stand up comedy right now. The place is run like a Swiss watch with incredible service and attention to detail AND it's part of the Second City family so you know they know funny, Our lineup for this show is insane. Read the PR blurb, check out the lineup, and then SAVE THE DATE!

Your favorite Chicago comedy blog and the Up Comedy Club (Second City) has joined forces to produce an insane showcase featuring the top Chicago comics the city has to offer.