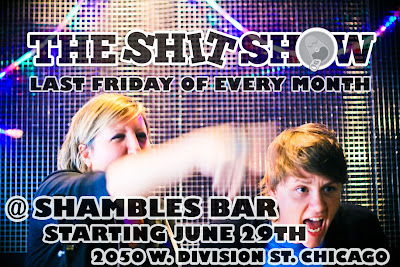 I don't know you. I don't what you do on your free time... or who you do it with. That's your business... But since your reading this I will assume you dig yourself some funky Chicago comedy and I will go even further and assume you dig free shit as well. Well tomorrow night you can experience the best of both worlds and check out a FREE comedy shit show (literally the name) of epic proportions that you and all your cheap friends (or non cheap friends, we don't judge) should check out. "The Shit Show" is a monthly comedy showcase on the last Friday of every month and we recommend it highly. Don't take our word for it... check out what the Gapers Block had to say about it:

Wicker Park’s Division street knows how to party, and tonight, 8pm at Shambles (2050 W. Division), it’s going to be a Sh*t Show. The Sh*t Show is a monthly stand up comedy showcase that features dynamic line-ups of alternative comics, funny storytellers, and Chicago’s top headliners. It’s hosted by comedy swiss-army-knife’s Ever Mainard and Rasa Gierstikas. The show is FREE and be sure to check out this hysterical PG-13 promo video to see what’s in store for you at the Sh*t Show. 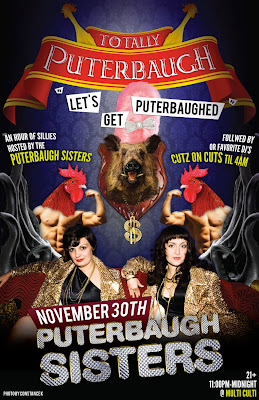 Anyway.. a dope ass comedy line up, cheap drinks and NO COVER... what's not to like?

After that if your still ready to party we also recommend the Totaly Puterbaugh Showcase which is sort of a late night comedy show dance party hybrid that you really have just peep for yourself to properly appreciate.  The comedy show happens first with a fresh and talented line up of local favorites.  If you know anything about the Puterbaugh Sisterz then you know they are well respected in the scene and consistently book the best comics possible.  Peep the lineup:


Also the whole event will take place inside a super hip artist/underground loft space with multiple DJ's spinning non-commercial beats and lots side action art an tomfoolery.  Had a total blast last time and left around 4AM. Do yourself a favor and get there.