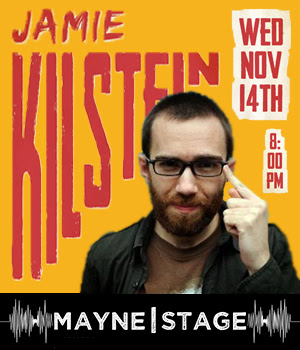 Jamie Kilstein will be in town at the gorgeous Mayne Stage this Wednesday. We highly recommend that you Jump on this event while you can, since he's only performing for one show.

Kilstein was one of the very first comics I ever saw perform in Chicago and he sort of blew away any preconceived notions I had on what kind of material the new breed of young comics are allowed have in their arsenal. If you like your comedy smart and political (cause who wants dumb and apathetic...) then Kilstein is your man.

But don't just take my word for it... Comedian Janeane Garofalo once said this about him: "Watching Jamie reminds me of why I got into comedy. It is like watching combination of George Carlin and Bill Hicks."

You just can't get a much better plug than that... Check out the press release then get some tickets while you still can.


Jamie has been seen on “Conan,” “Countdown with Keith Olberman,” Showtime’s “The Green Room,” CNN’s “The Joy Behar Show,” The Paramount Comedy Channel in the UK, The BBC, The Comedy Channel in Australia, HBO Canada, and Showtime Comedy in the Middle East. He Co-Hosts Citizen Radio (wearecitizenradio.com) which has been praised by Janeane Garofalo, Noam Chomsky, Robin Williams and him and his co-host were named by The Nation Magazine as top “media heroes.” His new album, “Libel, Slander & Sedition” made it to #2 on the iTunes charts less than 24 hours after its release this month. He is taped his debut one-hour special for SHOWTIME in Fall 2011 and will be appearing in the new Showtime series, “LIVE FROM AMSTERDAM” in 2012.

Kilstein was in Paul Provenza's recent best seller Satiristas, alongside Stephen Colbert, George Carlin and other iconic satirists. Kilstein was invited to the most sought after show at The Montreal Comedy Festival, for 2007 and 2008 and brought his one man show there in 2010 after debuting it at the Upright Citizens Brigade Theater. He was Punchline Magazines "One Comic to Watch in 2009", a Timeout Chicago, Sydney, and London's Critics Pick. He performed at the Melbourne Comedy Festivals prestigious Town Hall, and has played the concert hall of the Sydney Opera House.
Newer Post Older Post Home