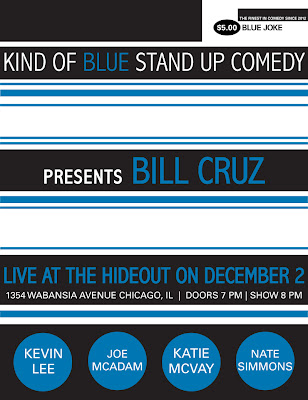 With the holidays fast approaching and the economy still struggling, everyone is constantly looking out a good deal. Well that's appropriate cause the Chicago comedy scene has plenty of high quality, low cost options going on this weekend, so lets get right to it.

The first show we want to plug is the Kind Of Blue showcase (Dec 2) at the Hideout, which is aptly titled since it's in between the north-side hoods of Wicker Park and Old Town, but you'd never find it if you didn't know where to look.

The Hideout really is a hidden gem. It's demure frame cloaks a surprisingly large venue that boasts some of the best live performances you can find in the city. It's "the bar Granddad went to when he was young and crazy".  Huge musical acts like the White Stripes have performed there as well as prime time comedians like Patton Oswalt and Hannibal Buress during the JFL Festival.

The KOB lineups have been stellar, this is in no small part due to the fact that it's produced by working local comics Nicholas Rouley, Nate Simmons, Joe McAdam, and Derek Smith who are all solid stand up talents  in their own right.  Sunday's lineup is no exception, headlined by veteran funny man Bill Cruz, (one of our favorites) and hosted by Derek Smith who has been on fire lately. Highly recommended.. plus the SHOW IS ONLY 5 BUCKS!  Cant beat that... check out the line up.


Check out our other hot/cheap picks for this weekend...


Creative Control with Joe McAdam: November 2012
Friday Night
A FREE BYOB COMEDY SHOW! What!?  Yep you heard right... the show is produced inside of a hipster record store right in the middle of the north-side neighborhood of Logan Square. This monthly showcase constantly gets great young comics and lively crowds... recommended.

JOE KILGALLON @ THE COMEDY BAR
The Comedy Bar- Chicago
Friday & Saturday
A swanky downtown venue that consistently presents the best headliner comics in Chicago (and the country) for $10 bucks!?

The Lincoln Lodge 11/30
The Lincoln Lodge
Friday Night,
Longest running showcase in Chicago
Always a solid lineup of professional comics... a great show for a great value.
Tickets start at $8

Entertaining Julia
Sunday Night
FREE!
Simply a blast... the Puterbaugh Sisterz keep it weird and funny... in the heart of the north-side neighborhood of Boystown at the divetastic Town Hall pub... recommended!