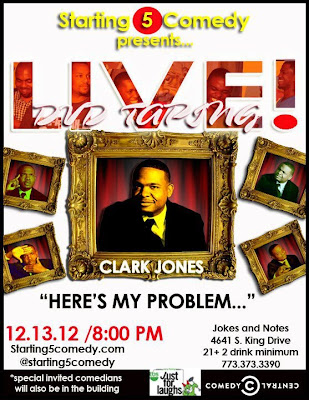 Clark Jones is one prolific, creative ass dude. Not only is he a great writer (with articles appearing in the Chicago Tribune & Ebony Magazine to name a few) and a working comic that performs all over the city at venues like the Laugh Factory, Comedy Bar, Zanies, Jokes & Notes, etc., but he also co-hosts Two Black Dudes and an Open Microphone, a monthly open mic at Town Hall Pub that's one of the best in Chicago.

On top of all that Clark is a member of local comedy collective The Starting 5, alongside with comics Calvin Evans, Lem Slaughter, Sean Munroe, and Quincy Brown... So it's a big deal that tonight Clark Jones will be recording his headlining set at Jokes & Notes for his upcoming DVD, entitled: "Here's My Problem". We recommend you catch it.