If you don't know who Hannibal Buress, I will enlighten you (although you should try to occasionally get out of that cave you live in). Buress, a Chicago native, is one of the hottest up & coming comedians in the country and will perform at the Zanies Chain of Comedy clubs in Chicago, Rosemont and St. Charles Dec. 29-31. As a comedic talent Buress is prolific, he's written for Saturday Night Live, 30 Rock, and writes and co-hosts Adult Swim’s The Eric Andre Show. In May Buress debuted a Comedy Central special, "Hannibal Buress: Animal Furnace", he hosts a weekly stand-up show at The Knitting Factory in Brooklyn and has just signed a deal with ABC to co-write and star in a comedy pilot about a police officer in a small, suburban community.

On top of all that Hannibal Buress frequently returns to Chicago and hits up a plethora of local showcases and open mics on the regular. I've personally seen the man perform at Coles, Lotties (rathskellar open mic), Comedians You Should Know, Town Hall Pub and the Chicago Underground Comedy showcase to name a few. Basically he works all the comedy hot spots when in town, tours the country, headlines countless venues in New York where he lives and it's all clearly evident because his comedy skill is ridiculous. Buress is, as they say, on the verge. We chatted for a bit on the phone while I tried to hide from co-workers. 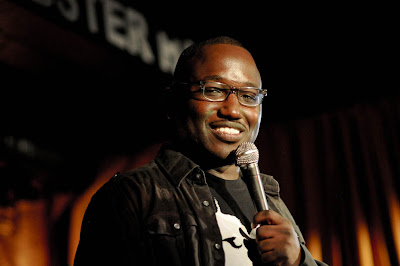 Comedy Of Chicago: Seems like whenever you back in town you hit up local open mics and showcases, why is that important, and what is your writing process?
Hannibal Buress: That's two different questions man!

COC: Sorry man, I'm at work, shits crazy... why do you still hit up open mics on a regular basis?
HB: To get better. Open mics are where I can try new jokes on stage without looking like an asshole. I can figure out the timing and the wording, and I can experiment since most open mics are free or $5. I can't do that at the big shows where people paid a lot of money to see me perform. At open mics is where writing happens and how I figure out how to make it better.

COC: Whats you favorite Chicago open mic?
HB: I like Coles a lot, it's fun. Lotties (Rathskellar Open Mic) is good, McDunnas (now Ace Bar) was Cool. I also like rooms where I can do a longer set. Now a days I need more time then the average 4-5 minutes you get  at most open mics, but that's why I do a lot of showcases like Chicago Underground Comedy etc. 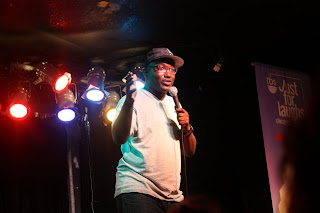 COC: Recently Dan Telfer wrote a Best of Chicago article for us and named some of his favorite places to eat. Do you have a favorite Chicago food spot?
HB: After shows I like the Diner Grill on Irving Park. It's close to a lot of rooms and the hash browns are really good. I also like that they make the food right in front of you... so they cant spit it in or any thing like that. Well they could but they would have to be super sneaky about it.

COC: You recently performed at a Thanksgiving Chaos" show at Schubas. What's the story around that, did you produce the show or did they reach out to you or what?
HB: I produced that.  It was a great show. We had Junior Stopka, Lil Rel, Martin Morrow and his group Mar'son & the FYF Crew. I had wanted to produce a show there and thanksgiving was the perfect time to to do it, we got a good crowd and it was a lot of fun. But it's the not my first show, I also produced a show at the Lincoln Hall as part of the Pitchfork Festival.

COC: Is that something Chicago comedy fans can look forward to? More Hannibal Buress produced showcases?
HB:  Not for a while... Maybe in the fall.

COC: Thanks for talking with me man.
HB: Thank you.

There you have have it, get out there and maybe you will see Hannibal out and about.