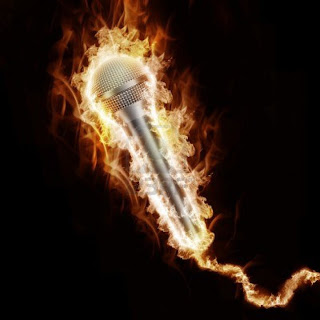 What I'm getting at is something we can all feel as we try to make our way in the world. The focus here is comedy, but it applies to sitting in on a business meeting, or just trying to get people to listen in the schoolyard. Humor is subjective, and what that brings with it, is that it doesn't matter if your joke concept is great if no one's going to listen to it, let alone laugh at it.

When you come out of nowhere, no matter how good your joke, the audience needs something to connect them to you, something that has them rooting to laugh at your performance, even if, in some other ways, they might hate you. It shouldn't be about what they think of you as a person, just whether or not you're getting them to laugh. After all, not every comic persona is built upon being a lovable person.

The goal, as I see it, is to rise above simply getting a rise out of people, and to be making a legitimate social commentary interwoven with, and layered beneath, jokes. It's rare that a comic does this right from the start. Whether it's 6 minutes of clean TV material, or 6 minutes of inane dick jokes (although I'd say don't start there, unless it's really clever, grows, has a rhythm and then explodes unexpectedly hitting the viewer below the belt), remember that it's okay to not start where you expect to end up. You can't find your voice if you never use it. But don't expect everyone to like your voice (even you — seriously, have you heard your own voice? Generally you're going to find it annoying), they shouldn't.

The thing is, that you don't have to have any truly grand plan with your comedy. Everyone's version of grand is different. Maybe you just want to be able to tour, and you just want folks to laugh, for your own validation, or to crack through the shitty ice of day-to-day life. What I just mentioned as a goal I have done, on a stage, perhaps a grand total of never. That's just where I'd like to be.

So instead of blogging and not attending open mics or shows for six months, instead of grumbling about how you're funnier than the asshole/bitch/motherfucker you just saw on stage (you might be, you might not be, either way you'll still almost inevitably say this to yourself), remember telling jokes is a privilege, not a right, take advantage, and give people a damn reason to want to listen to what you're saying.