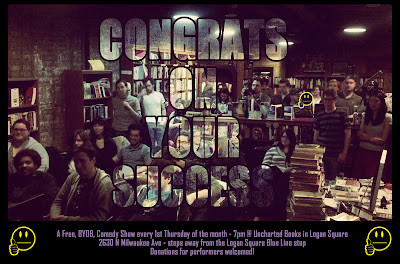 Wow... This weekend is shaping up to be a beautiful opportunity to catch some great Chicago Comedy. For those of you who are budget conscious but still looking to enjoy some high quality comedy, many of these shows are free and/or have great specials going on. There are a lot of events popping off starting tonight, so lets get to it.

Never Been to Paris
The Comedy Bar
Sean Flannery's critically acclaimed one man show. Flannery has been tearing shit up lately with featured appearances on Comedy Centrals Mash Up. His one man show is hilarious... read why:
After being voted best stand-up comedian in Chicago in 2010 by The Chicago Reader, Ohio-native Sean Flannery brings his one-man show to The Comedy Bar with hilarious tales of his several brushes with death. Sean explains, “While telling the stories, I show pictures from the events and mix other multimedia into the show - voicemails, video and even some animation. In some ways, it's like watching a guy show his vacation photos - if he nearly killed himself 10 times on his vacation.

FREE THE GIRLS: Comedy For A Cause
Laugh Factory Chicago
Bring a bra (a new or newish one fools!) and get 2 free drink tickets!
Tonight!

STAND UP STAND UP PRESENTS: BILL CRUZ
Stand Up Stand Up
FREE SHOW, FREE PIZZA and Bill Cruz... it's a no brainer BE THERE!
Tonight!

Loni Love @ The Up Comedy Bar
Loni Love starred in her own half-hour special for Comedy Central in 2007 and has also been seen on the channel's "Premium Blend," "Weekends at the DL" and "Chocolate News". Her many television appearances include "The Tonight Show with Jay Leno," "The Late Late Show with Craig Kilborn," "The Best Damn Sports Show Period", VH1's "I Love the 70's/80's/90's," "Vh1's The Great Debate" and "Comics Unleashed" among numerous others.
Dec 6-9

Jim Belushi @ The Comedy Bar!
We just checked the website and the first two shows look sold out! But the are some midnight tickets left... Better hop to it if you wanna go! The local line up is stacked:
Dan Ronan
Bryan Babylon
Ben Moore
Ryan Dalton
Hosted by the one and only Jim Belushi
Friday Dec 7

Clark Jones "Here's My Problem" taping presented by The Starting 5
Jokes and Notes
This isn't for another week but we just wanted to put it on the rader... get tickets now. $5 ONLINE!