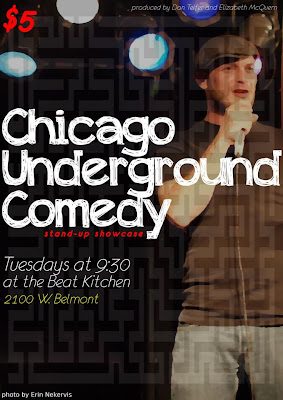 I pity those poor people who only go out on the weekends.  No it's not sensible... its fucking lame.  Life is too short to wait around for the socially acceptable "fun" time to limp around every 5 days.

That doesn't mean you have to get completely shit faced or stay out until dawn (or until it's time to go to work and you show up in the same clothes you went out to party in... been there). But hell, turn off the TV every once in a while and get out there, trust me your missing out on some great Chicago night life. Especially because there are so many outstanding comedy options to take advantage of and Tuesday is no exception.

Tonight's standout showcase has got to be the Chicago Underground Comedy showcase at the Beat Kitchen, in the north side neighborhood of West Lakeview. The line up is extra stacked, check out the PR info: 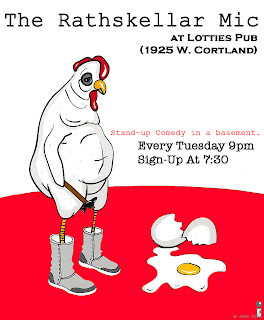 Also going on tonight is one of the finest open mic's going on in Chicago. It's really more like a showcase since so many high quality veteran comics prefer to perform there. Of course I'm talking about the The Rathskellar Open Mic at Lotties which recently got a nice shout out in timeoutchicago.com

Also going on tonight is the always fun and FREE showcase that goes by the wonderfully silly name of Hug City Productions in Lincoln Park. We've plugged this show many times so we won't go too far into details other then to say it's probably the best deal on the planet in terms of the level comics they consistently book. Check out the lineup:

Hey kids! Our world famous FREE stand up comedy showcase is back and this week's lineup is insane. If you've been thinking of checking out our show, this is the week to do it! As always, along with Chicago's funniest comics we'll be offering 25 cent wings with homemade sauces and cheap mugs of suds.
12/4 Lineup:
Mike Lebovitz
Drew Frees
Andrew Halter
Erica Nicole Clark
Hosted By: Shane Copland!!!