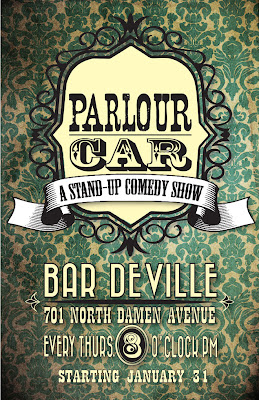 I think my favorite word to describe a good ass time is... bananas.  I just dig it, has a ring to it. When bananas is used to describe an event or party you know the shit was wild.

Well this new showcase fits the bill. perfectly. A FREE showcase featuring the best comedic talent in Chicago, at a venue Chicago Magazine has voted one of the 12 Best Cocktail Spots in the city.  What!?

Parlour Car is Produced by three of the hardest joke slinging, booze handling, redheaded monsters in the game. They are, as they say, some real motherfuckers. All three are accomplished in their own right, with a trained veterans eye for the art of comedy.  Very excited to peep what insane lineups will be coming down the pipe.  Starts This Thurday Jan 31st

"Three local comedians have just announced they will be launching a new, free weekly stand-up comedy show called Parlour Car. The show will take place every Thursday evening at 8:00pm at Bar Deville in the city's East Village neighborhood, and is helmed by comedians Adam Burke (Wiggle Room, TBS Just for Laughs), Matty Ryan (co-producer, Blackout Diaries), and Kenny DeForest (formerly of The Wind Up). Parlor Car's first installment will be Thursday, January 31st at 8:00pm.  Each show will feature five of the city's very best stand-up comedians, as well as occasional national acts. The show will also be free-of-charge. “We noticed there was a dearth of stand-up options in the neighborhood, and when Adam, Kenny and I saw the back room we just fell in love with the place,” says show producer and host Matty Ryan. “The three of us are kind of old-fashioned at heart so it seemed like a really classy place to hold a show, that hearkens back to old Chicago.” Bar Deville, home of Parlour Car, was recently voted one of the 12 Best Cocktail Spots in the city in the February 2013 issue of Chicago Magazine. The combination of hand-crafted cocktails and the warm, intimate setting of Deville's back room will be sure to set this show apart from other stand-up offerings
Throughout Chicago."