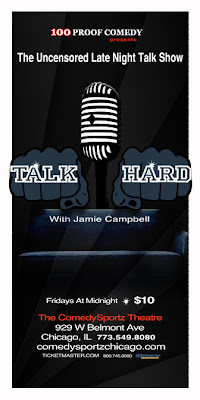 Billed as "The Uncensored Late Night Talk Show", Talk Hard, which goes down every Friday at midnight inside the acclaimed ComedySportz Chicago theatre, has already created some hot buzz in just a few weeks.

Hosted by the prolific Jamie Campbell (TBS Just For Laughs, ABC, NBC), along with sidekick Kevin Pomeroy (The Stevens Family), Talk Hard features special guests, crazy characters, and a Chicago brand of cutting edge comedy that's being created by a hand picked team of the best comedian/writers in the scene. The list of staff writers reads like a who's who of local talent. Check out the team.

It's exciting for me as a comedy fan to see this sort of epic effort put into a local talk show because of the greater implication. You see, at heart most comics are... writers. So because of a lack of industry (general entertainment industry, not stand up), most comics, when they get to a certain level, move to either New York or LA. There is simply not enough work for folks to live on. So having a vehicle where Chicago's exceptional talent pool of comics can showcase some writing prowess is a great opportunity.

Doors open at 11:45 p.m. Tickets cost $10 each and can be purchased at The ComedySportz Theatre box office. Purchase tickets in advance by calling 773-549-8080 or at the door. Attendance at the 10 p.m. ComedySportz improv show gets audience members into “Talk Hard” at half price.